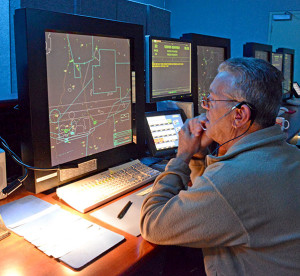 When test pilots take off from the friendly confines of Edwards Air Force Base, Calif., they can take comfort knowing they’re not alone up there.

In a dark room at Ridley Mission Control, where computer screens and monitors provide the only light, air traffic controllers track and maintain constant communication with Edwards pilots and other air traffic control facilities, which plays a crucial role in the test mission.

The R-2515, SPORT’s area of responsibility, is a restricted air space due to the potentially dangerous test mission the Air Force Test Center performs. When active, it restricts general and commercial aviation from entering.

Scanlan says “de-confliction” is the name of the game for SPORT. The unit assigns an individual controller to each test mission and each controller is responsible for communicating traffic conflicts and airspace boundaries to their specific test mission, which can include multiple aircraft. SPORT controllers inform pilots of the location, flight direction and altitude of other aircraft in close proximity, such as Navy planes from Naval Air Weapons Station China Lake, California.

This de-confliction service SPORT supplies allows test pilots more time to concentrate on completing their test points without having to constantly monitor their own radar for other aircraft in the area. 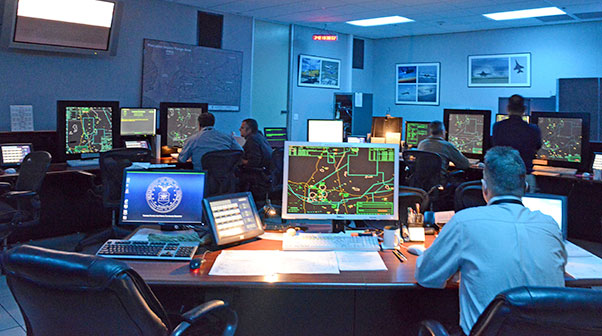 The 412th Operations Support Squadron’s Space Positioning Optical Radar Tracking, or SPORT, operates in a room at Ridley Mission Control where computer screens and monitors provide the only light. Air traffic controllers track and maintain constant communication with Edwards pilots and other air traffic control facilities, which plays a crucial role in the test mission.

“Most DOD military radar units simply clear aircraft into restricted airspace,” said Bruce Strong, 412th OSS SPORT manager. “Once the aircraft are in the restricted airspace, no other aircraft are allowed to operate in the same airspace or at the same altitudes. SPORT actively works all its traffic within restricted airspace and allows for tremendous flexibility through real-time de-confliction of test missions. This allows aircrews to maximize airspace resources to accomplish the mission while ensuring flight safety. It’s this real time de-confliction that makes SPORT unique and enables the 412th TW to accomplish its mission.”

Strong said multiple controllers working test missions while sharing the same airspace presents a challenge for SPORT. This is contrary to typical air traffic control units where a single controller provides separation for all aircraft operating in that controller’s airspace.

“Also, most ATC facilities work aircraft as they basically fly a straight and level altitude on their way to a destination opposed to what SPORT does is work vastly different airframes doing everything except staying straight and level,” added Strong. “At times this may look and sound chaotic, but it is actually a very well-orchestrated and controlled environment.”