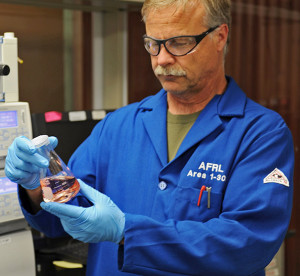 Under the agreement, the company will produce and sell the Air Force developed monopropellant, AF-M315E. The PLA was coupled with a cooperative research and development agreement that allows AFRL scientists to collaborate with the company to provide technical knowledge and advice.

“This is a huge step for AF-M315E transition and also a segue into commercialization of future energetic ionic liquids,” said Dr. Shawn Phillips, chief of the Rocket Propulsion Division at Edwards Air Force Base, Calif.

Historically, hydrazine is used for space propulsion. However, it is a carcinogenic chemical that is considered toxic and requires strict production and handling protocols. In contrast, AF-M315E incorporates hydroxyl ammonium nitrate as the principal component. HAN is an energetic, iconic liquid. The new propellant, which is considered “green,” lacks vapor toxicity and doesn’t require such strict handling procedures. This leads to a significant savings in processing and handling costs.

That’s not where the improvements end.

The propellant also enhances performance. According to Adam Brand, one of the AFRL co-inventors of AF-M315E, the propellant delivers a 50 percent performance improvement over hydrazine. It is denser and requires less fuel per mission. The improvements enable either smaller, higher-performing spacecraft or longer-life assets in space.

“Commercializing AF-M315E gives both the commercial and military space communities the confidence that there is a long-term source for the propellant,” Brand said. “With this agreement in place, AFRL can concentrate on the discovery and early development of new propellants.

Digital Solid State Propulsion was a good fit as a commercialization partner because of the company’s vast experience producing electric propellants using HAN oxidizer. The company has already put a HAN-based propellant into space on the Naval Research Laboratory Special Purpose Inexpensive Satellite.

“Our business already revolves around HAN based propellants, so we already have the expertise in handling and dealing with compatibility concerns,” said Dr. Wayne Swaka, owner of Digital Solid State Propulsion. “We already had much of the necessary equipment for processing.” 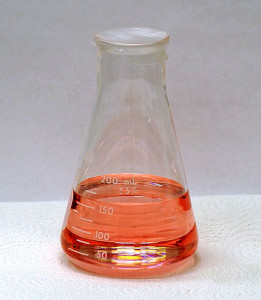 A sample of AF-M315E, a green alternative to hydrazine that was developed by the AFRL Aerospace Systems Directorate Propulsion Branch. AFRL recently licensed the propellant to Digital Solid State Propulsion for commercialization.

The agreements are already showing results, namely sales and business growth for the company.

“We made a few upgrades to our current facility and hired one additional full-time employee so far,” said Swaka. “Depending on demand, we could hire more in the coming year.”

The company has already sold propellant to NASA and scheduled an Air Force order. Interest from the commercial sector is not far off.

“The commercialization of technologies from the Aerospace Systems Directorate is a cornerstone of our technology transfer program,” said Kristen Schario, AFRL/RQ Team Lead for Tech Transfer. “We’re happy to see this partnership develop and grow so rapidly.”