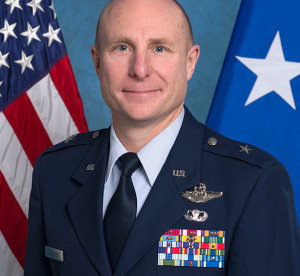 Secretary of Defense James Mattis announced Feb. 7 the names of dozens of general and flag officers who were nominated for promotion by the president.

Schaefer has served as commander of the 412th TW and Edwards Air Force Base since March 2015 where he leads a wing of 9,000 personnel in the developmental test and evaluation of virtually all aircraft and emerging technologies in the Air Force inventory.

Additionally, Schaefer is the installation commander responsible for operating the base and supporting more than 12,000 active duty, reserve, civil service and defense contractors at Edwards — the second largest base in the U.S. Air Force.

The general was commissioned in 1990 as a distinguished graduate from the U.S. Air Force Academy.  He has served in a variety of flying and staff assignments to include command at the squadron, group and wing levels.

Schaefer is a U.S. Air Force Test Pilot School graduate and a command pilot with more than 3,000 flying hours in over 30 aircraft types. He has flown combat missions in support of operations Deny Flight and Allied Force.