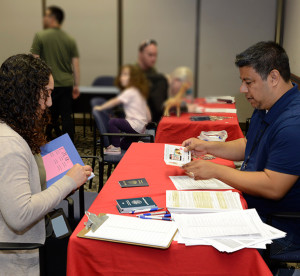 Lea Ricci, 771st Test Squadron, goes over her passport application documents with a passport specialist from the Los Angeles Passport Agency at the Airman and Family Readiness Center Feb. 6, 2018.

To show their support for the military, passport specialists from the Department of State drove up the freeway from Los Angeles to conduct a passport fair for the Edwards Air Force Base, Calif., community Feb. 6, 2018.

Attendees brought their applications, passport photos and identification to the Airman and Family Readiness Center to hand over to one of ten passport specialists who then took the required fees to process the applications. Those who attended can expect their passports in about four weeks.

“We wanted to do something for the military so we reached out to all the bases in our region, which includes California and Nevada,” said Chans Chiv, Los Angeles Passport Agency customer service manager. “Instead of having to go to local passport acceptance centers, like the one in Lancaster, we thought it would be convenient for us to come to the base; it looks like it’s a success.”

Chiv said his office visits Vandenberg Air Force Base, Calif., on a regular basis but hopes they can come to Edwards once a year as well.
The 412th Force Support Squadron acted as gracious hosts for the visit, said Chiv.

According to the State Dept., there were more than 21 million passport issued last year. People can apply for passports a couple different ways depending on if the applicant has had a passport in the past or if they are a new applicant.

If someone needs a passport, it is recommended to apply sooner than later.

“We want to emphasize that if you need a passport, start the process early,” Chiv said. “A lot of countries require your passport to be valid for six months before you can travel there. And if you have young children, their passports are only good for five years and they cannot renew by mail, they must show up in person to renew their passports.”

For more information on passports, go to https://travel.state.gov/content/travel/en/passports.html.