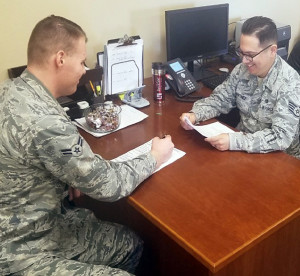 The ADL is a special-duty position; which is hand-picked by 412th Test Wing Command Chief Master Sgt. Roosevelt Jones.

Martinez will have many responsibilities in his new position such as mentoring residents and assisting them in adjusting to military life. He ensures residents comply with directives, uphold dorm living standards, help assess good order and discipline, as well as exercise general supervision over residents.

“Staff Sergeant Martinez has an important job, he will be on the front line helping to develop some of the country’s finest assets, our young military members in their careers, we are glad to welcome him to our team,” said James Judkins, 412th CEG director.

Martinez entered the Air Force in 2006 as an airman first class thanks to his college experience. After basic training and Aerospace Ground Equipment technical school, he arrived at Joint Base Lewis-McChord, Wash., in support of C-17 Globemaster operations. He then deployed to Al Udeid Air Base, Qatar, in support of Operations Iraqi Freedom and Enduring Freedom. After five years at JBLM, Martinez was awarded an AGE position with an F-35 Joint Strike Fighter unit at Edwards AFB.

During his time here, he has established himself with leadership roles both on- and off-duty. His persistence in these roles and dedication to the mission helped earn him the ADL position.

According to Martinez, he frequently looks for ways to mentor others in the community.

“I found a great way to combine my passions for music and community as well as a chance to give back,” said Martinez. “When I heard there was a dorm leader position opening, I thought it would be a great opportunity to get involved again with mentoring junior enlisted service members. As a young staff sergeant it was very seldom that I had chances like this at my prior positions.”

Martinez began the first month on the job teaming with his fellow dorm managers, first sergeants and the 412th TW command chief developing the new bay chief program to replace the prior bay orderly program. The new program is designed to allow junior enlisted members additional leadership opportunities within their social communities, restore pride and ownership in their living areas and refocus up to 9,700 man hours annually into training and unit readiness.