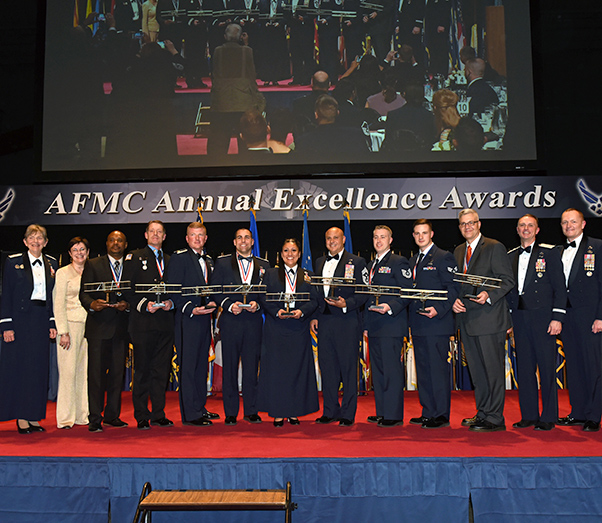 The Annual Excellence Award Banquet on March 7, 2018, served as the venue to honor Air Force Materiel Command’s top Airmen for 2017.

Four airmen from Edwards Air Force Base, Calif., were honored as part of the evenings festivities.

“Tonight we’re recognizing 61 Airmen who make me proud to wear this uniform. I can’t imagine a better place to be than here to celebrate,” said Pawlikowski.

“These 61 individuals represent the ‘best of the best’ from across our command. These Airman are unsung heroes who diligently toil every day to ensure our Air Force remains the world’s greatest,” said France. “Sixty-one may seem like an odd number, but my point here is simple–these 61 individuals are the top 0.0007% of AFMC and, in my humble opinion, the top 0.00001 percent of our Air Force.”

Airman Category–Senior Airman Patrick O. Schilling, Air Force Sustainment Center, Hill Air Force Base, Utah. As an Explosive Ordnance Disposal Journeyman, Schilling filled the role of munitions account manager for the Air Force’s largest custodial account during his supervisor’s absence, during which he was responsible for saving $6 million in storage and maintenance costs. From this position, he earned Air Force Materiel Command’s nomination for Enlisted Military Assistant to the Secretary of Defense. Furthermore, he partnered with the United States Secret Service during the presidential inauguration.

Winners in the four enlisted categories will represent AFMC in the United States Air Force Twelve Outstanding Airmen of the Year and First Sergeant of the Year competitions held later this year.