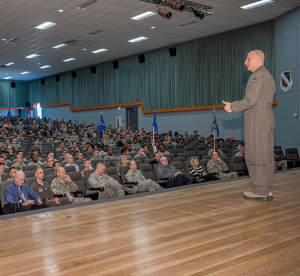 Brig. Gen. Carl Schaefer, 412th Test Wing commander, held his first commander’s calls of 2018 in the base theater March 13. Two sessions were held with one in the morning the other in the afternoon.

During both the morning and afternoon sessions, he began by thanking everyone for their continued support and expressed how honored he is to be part of such an “amazing group of people.”

“Everyone’s of value and deserves to be treated that way,” said Schaefer. “When everyone is treated with value, harassment, discrimination, a toxic culture just goes away.”

According to the commander, health and safety of the Edwards workforce is his number one priority and he emphasized the business done at Edwards AFB needs to be secure. Once there is safety and security, execution of the mission can be accomplished, he said.

The general also highlighted the completion of the Systems Demonstration Development phase for the F-35; continued KC-46 Pegasus tanker testing; and the continued partnership in Missile Defense Agency tests using C-17s from Edwards.

Other accomplishments such as a new barrier system installed on the main runway and how Marines, Sailors and civilians continue to graduate from Airman Leadership School also topped the list of Schaefer’s highlights.

As Edwards continues to test new and advanced systems for the Air Force and sister services, Schaefer reminded the workforce to continue to innovate to stay ahead of America’s enemies.

Schaefer noted how the country continues to have threats and remains engaged in a 16-year low-intensity conflict in Iraq, Afghanistan and Syria.

“Our air supremacy, cyber domination, space supremacy has not been countered at all. This doesn’t mean we haven’t lost precious life, but in general we have protected the homeland from violent extremism,” said Schaefer.

However, the general added the Air Force needs to be ready for a different type of fight and will need to refocus on a higher intensity fight with a “ready force as a deterrent.”

Schaefer then transitioned back to people of the test wing by reminding everyone about the resources available if employees or family members need help, whatever it may be. He encouraged those in need to seek help from the resources provided by the Air Force that can benefit military as well as civilians.

The Airman and Family Readiness Center has resources such as finances, relocation assistance and deployment readiness. Edwards also has the 24-hour Sexual Assault Prevention Response Program.

Schaefer also mentioned the need for motorists to obey the base speed limits in order to keep the roads safe and to utilize the Airman Against Drunk Driving program. Those off base outside of duty hours can call 277-AADD if they had too much to drink.

According to the chief, Course 14 and 15 will be eliminated for active duty and changes are coming to Airman Leadership School, the NCO academies and chief leadership courses. Perhaps the most notable change Jones touched on are the new uniforms coming to the Air Force.

“There’s going to be a phased approach to everyone getting their (new combat uniforms) based on mission and location,” said Jones, who added more information will be coming soon.