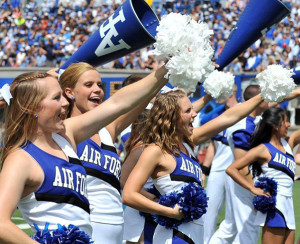 In pediatrics, we regularly emphasize how exercise is key to a healthy lifestyle and maintaining a healthy weight. In children and adolescents, physical activity is commonly accomplished by participation in organized sports.

March is National Cheerleading Safety Month. It’s a great opportunity to remind people that cheerleading, while continuing to surge in popularity, causes more catastrophic injuries than all other female sports combined.

As of 2012, when the American Academy of Pediatrics released their guidelines for preventing injuries in cheerleading, only 29 state high school athletic associations recognized cheerleading as a sport. Additionally, 67 percent of female athlete injuries at the collegiate level are due to cheerleading accidents, while the NCAA does not recognize it as a collegiate sport.

The concern about cheerleading not getting universal recognition as a sport is that the risks these athletes face while competing will not get the full attention they deserve. The hope is that by gaining recognition, increased focus will be placed on safety and injury prevention.  This most recent academic year, our own state of California began officially recognizing cheerleading as a competitive sport.

The most common injuries are sprains and strains of lower extremities (joint and muscle inflammation, respectively), followed by head and neck injuries, including concussion. Broken bones are not uncommon. The impressive feats performed by cheerleaders – pyramid building, lifting, tossing and catching athletes midair — are the cause for about half of all injuries and nearly all concussions. Collegiate cheerleaders face a higher risk of injury than our middle and high school athletes.

As mentioned previously, at least one hour of physical activity a day is necessary for a healthy lifestyle in children and adolescents. But equally important is safety.

In 2012, the AAP made key recommendations for injury prevention. Among them was cheerleading should be designated as a sport in all states, allowing for benefits such as qualified coaches, better access to medical care and injury surveillance. All cheerleaders should have a pre-season physical, and access to qualified strength and conditioning coaches.

Cheerleaders should be trained in all spotting techniques and only attempt stunts after demonstrating appropriate skill progression.

Coaches, parents and athletes should have access to a written emergency plan. Any cheerleader suspected of having a head injury should be removed from practice or competition and not allowed to return until he or she has clearance from a health professional.

For more information, including how to formulate and implement your Emergency Action Plan, please check out the following website: https://www.cheersafe.org/.