DOD graphic
The F-35 program has accomplished the final developmental test flight of the System Development and Demonstration phase of the program.

The F-35 Integrated Test Force is based at Edwards Air Force Base, Calif., and Naval Air Station Patuxent River, Md.

“Completing F-35 SDD flight test is the culmination of years of hard work and dedication from the joint government and industry team,” said Vice Adm. Mat Winter, F-35 Program executive officer. “Since the first flight of AA-1 in 2006, the developmental flight test program has operated for more than 11 years mishap-free, conducting more than 9,200 sorties, accumulating over 17,000 flight hours, and executing more than 65,000 test points to verify the design, durability, software, sensors, weapons capability and performance for all three F-35 variants.
Congratulations to our F-35 test team and the broader F-35 enterprise for delivering this new powerful and decisive capability to the warfighter.” 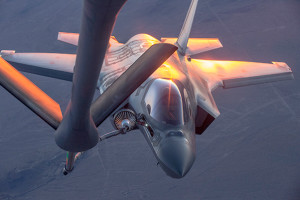 Twlight refueling between a B model F-35 with a KC-135 Stratotanker in the skies over California’s Mojave Desert.

“The F-35 flight test program represents the most comprehensive, rigorous and the safest developmental flight test program in aviation history,” said Greg Ulmer, Lockheed Martin’s vice president and general manager of the F-35 program. “The joint government and industry team demonstrated exceptional collaboration and expertise, and the results have given the men and women who fly the F-35 great confidence in its transformational capability.”

Developmental flight test is a key component of the F-35 program’s SDD phase, which will formally be completed following an Operational Test and Evaluation and a Department of Defense decision to go into full-rate aircraft production.

While SDD required flight test is now complete, F-35 flight testing continues in support of phased capability improvements and modernization of the F-35 air system. This effort is part of the Joint Program Office’s Continuous Capability Development and Delivery framework, which will provide timely, affordable incremental warfighting capability improvements to maintain joint air dominance against evolving threats to the United States and its allies.

With stealth technology, advanced sensors, weapons capacity and range, the F-35 is the most lethal, survivable and connected fighter aircraft ever built. More than a fighter jet, the F-35’s ability to collect, analyze and share data is a powerful force multiplier that enhances all airborne, surface and ground-based assets in the battlespace and enables men and women in uniform to execute their mission and return home safe.