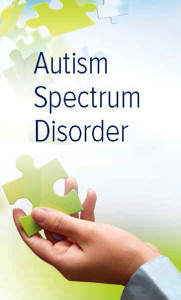 A regular part of wellness visits at the pediatrician’s office, particularly in infants and toddlers, is tracking the child’s development.

When a child is not developing as expected, especially in communication or social skills, it raises the pediatrician’s concern for an autism spectrum disorder.

For nearly 25 years, April has been recognized as National Autism Awareness Month.

According to the Autism Society, ASD is a complex developmental disability. The signs typically appear early in life affecting a child’s language and ability to interact with others. Some symptoms are now more familiar: difficulty with eye contact or conversations; narrow, intense interests; sensory sensitivities and poor motor skills. Many of these signs and symptoms can also be seen in children who do not have an ASD diagnosis. This demonstrates why ASD is said to exist on a spectrum.

Currently in the United States, one in 68 people are said to have a diagnosis of ASD. The condition affects males four times more often than females. Many think of ASD as a childhood condition, however the fact is people with ASD have the diagnosis for their entire lives. In pediatrics the focus is two-fold —early detection and intervention, then building a strong foundation from childhood to adolescence. For the first part, it’s key to visit the child’s physician for regular wellness visits. There, screening tools are standardly employed. They are designed to help the physician identify a potential ASD diagnosis before it becomes more apparent and problematic. For the second part, it’s important that once an ASD diagnosis is made the family work with the school system. This way the child can reach their fullest academic potential. It often means smaller class size and something called an Individualized Education Plan.

While the general public has become more aware of ASD and how it affects individuals, researchers unfortunately have been unable to identify a specific cause or cure for the condition. Evidence suggests a genetic cause but no single gene or “trigger” has been implicated. Multiple studies have demonstrated childhood vaccines are not a cause or factor in developing autism. While the number of affected children has increased since the 1970s, it’s currently felt this represents increased awareness and a broader definition of ASD. Experts do not believe this truly represents more children being affected than in the past.

Although not curative, several treatment and education approaches can improve outcomes for patients with ASD. The multiple therapies now available are most effective when tailored specifically to each child’s unique problem set. These resources have allowed many ASD patients to grow up and live in the community much more than they were able or expected to in the past. As adults they have more independence than ever before, holding jobs and living lives with happiness and dignity.

It’s important to highlight these advances that have occurred largely due to increasing awareness of ASD. The effort to continue increasing awareness is ongoing. It’s not only driven by people personally touched by ASD, but also through caring for or knowing someone affected. Many adult patients have been empowered by the above mentioned programs. Today they are taking on self-advocacy roles in the public sphere.

Anyone interested in learning more about ASD can visit https://www.autism-society.org/.