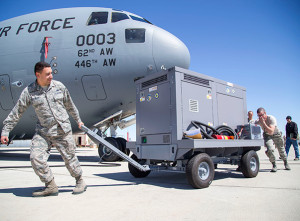 Staff Sgt. Justin Aguilar, 412th Logistics Test Squadron, tows a hybrid flightline generator in front of a C-17 Globemaster III March 28. The generator, which runs mainly on batteries, was tested at Edwards to learn if its technology can one day be fielded by the Air Force.

Tilley, along with several members from throughout Air Force Materiel Command, AFMC Support Equipment Program Office and Research Lab, descended on Edwards Air Force Base, Calif., to test out a new hybrid flightline generator the last week of March.

The team gathered valuable insight on how its Hybrid Flightline Generator Technology Pathfinder could possibly be fielded by the Air Force.

The hybrid generator is intended to service aircraft like a regular generator that works on diesel fuel, but with a smaller engine and a bank of batteries, which can provide power to fifth-generation fighters and legacy aircraft.

“It’s not a production unit, it’s a pathfinder,” said Tom Layne, Air Force Research Laboratory Materials and Manufacturing Directorate. “We’re trying some technologies and testing with the [Aerospace Ground Equipment (AGE)] guys and logistics to see what they like and don’t like. We got through the F-16, C-17, KC-135. The AGE crew went through it and evaluated it; they’re the customers who actually use it.”

“This item is what maintainers use so it comes to this office to do the testing,” said Philip Keene, 412th MXLS logistics test manager. “It’s more of a technology demonstration, not a product. It’s an easy fit for us.” 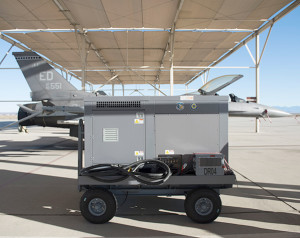 The Hybrid Flightline Generator Technology Pathfinder is intended to demonstrate the efficiency and effectiveness of a hybrid flightline generator with various technologies such as advanced batteries, power conditioning and grid-charging capabilities. It can be used on legacy fighters such as the F-16 pictured or on fifth-generation fighters and heavy planes.

“It’s light, it’s got a built-in generator so it powers itself so you don’t have to stop working as much,” said Tech. Sgt. Jacob Hush, 412th MXLS. “If you run out of gas on your AGE equipment, whatever you are doing, you’re done. They have to bring out a new (generator) and then hook it up and start where you left off. With this one, you can get out there on your jet longer without being interrupted.”

This is the second generator brought out to Edwards for testing.

“Last year we tested a cart that weighed 10,000 pounds,” said Layne. “This year’s cart is 4,300 pounds so it’s half the weight so it’s easier to push around and it has newer technology. I think Edwards people are accustomed to seeing new, cutting-edge stuff, so it’s nice to come out to Edwards.”

Probably the most important benefit of the hybrid flightline generator is the reduced stress it brings to maintainers. It is considerably more quiet and exhaust fumes are heavily reduced, said the testers.

“One drawback to current diesel generators is that they’re loud; hearing conservation is a benefit with the hybrid generator,” said Tilley. “Maintainers are important to the enterprise. The maintainer lays down at night and still hears the engine running in their head, so that’s what we wanted to try and capture — the physiological side. The hybrid generator also has low emissions so maintainers don’t have to go home smelling like smoke or JP-8 and stinky exhaust, and that’s what the maintainer likes.”

“Whether this generator is the one is up to question, but the concept is there,” Layne said. “For us, yes, we proved that we can be more efficient, but the real win was seeing the smiles on the operators’ faces; seeing improved safety and health conditions.”