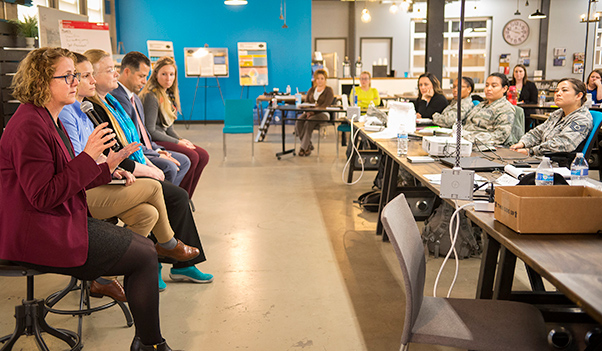 Debra Mitchell, lead associate at Booz Allen Hamilton, answers a question during the Air Force Materiel Command Equal Employment Opportunity Symposium in Dayton, Ohio, April 5, 2018. Mitchell took part in a panel discussion about EEO issues with professionals from across the command who attended the three-day event.

One of the central themes of the symposium was an in-depth break down of both the proactive role of the Affirmative Employment Program, and the reactive role of Equal Opportunity, and how they fit together to create the AFMC Model EEO program.

“The training was a phenomenal success. We wanted to bring in multiple facets involved in the Equal Employment process, while providing a collaborative environment for participants – and we did just that,” said Fore.

Attendees learned how to successfully establish and maintain an effective affirmative employment program of equal opportunity for the entire AFMC workforce.

The proactive aspect of the symposium involved an in-depth analysis of the hiring process, retention programs, developmental opportunities, and recognition realms to ensure that fair and equitable opportunities are granted to civilians, said Fore.

Fore said that overall it was an informative week of learning, training, networking, and insight into the complex world of EEO.