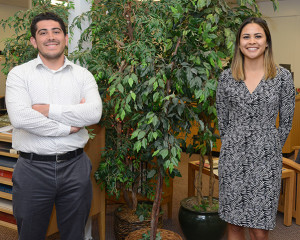 Aerospace engineers Bryce Milnes and Lauren Kruszewski from the 773rd Structures Flight, travel to multiple career fairs throughout the U.S. to recruit for all engineering disciples at Edwards Air Force Base, Calif.

Companies from all innovative disciplines often send engineers to career fairs all over the nation to search for future go-getters; and the Air Force test mission is no different.

Two aerospace engineers, Lauren Kruszewski and Bryce Milnes, from the 773rd Structures Flight, travel to multiple career fairs throughout the U.S. to “spread the word about Edwards Air Force Base.”

“It’s about recruitment and outreach. We’re trying to bring new engineers in,” said Kruszewski, who has been at Edwards for nearly a year.  “We find many [students] really don’t know what a test environment is. By participating, students receive information on Edwards’ career opportunities.”

Kruszewski became an aerospace engineer because she loves fighter jets. Milnes, also relatively new to Edwards, loved going to air shows as a youth and said the aerospace community has always been part of his family.

Being the new kids on the block motivates them to volunteer to go out and search for the next engineer.

According to Kruszewski, they try to do presentations in the classroom before a career fair takes place. This way, when students come by their booth, they see a familiar face.

“A lot of what we do here at Edwards AFB is what they teach (at colleges like Embry-Riddle Aeronautical University),” said Kruszewski.

When they attend career fairs, Kruszewski and Milnes recruit for all engineering disciples at Edwards. Milnes explained they have an idea of what they are looking for and they will pull out resumes of students who make an impression.

“We try to keep the base’s best interest in mind,” said Milnes.

One particular scouting opportunity allowed Kruszewski and Milnes to see how students perform under pressure.

Organizers from the Leading Efforts Beyond Engineering Challenge invited Kruszewski and Milnes to lead a student team during a two-day event. The engineering challenge held March 30-31 at Embry-Riddle Aeronautical University in Prescott, Arizona, gave students the opportunity to interview, network with some of the foremost engineering companies and participate in a competition against other groups of students.

They visit many engineering colleges, but both have said that it’s especially nice going to Embry-Riddle because both Kruszewski and Milnes are graduates of the university.

Eager to return to their alma mater, Kruszewski and Milnes agreed to lead a student team at the challenge.

The LEBEC Organization, which is a student committee supported by faculty members, plans the challenge where students use their creativity and imagination to showcase their engineering skills.

“The challenge offered another way to scout for potential full-time candidates, without grade point averages or resumes on the table; it allowed a better look into the students’ knowledge, critical thinking skills and teamwork abilities”, said Kruszewski.

Industry representatives interviewed students for about three-to-five minutes during the first phase of the challenge. Kruszewski and Milnes spoke to approximately 70 of the 90 students in attendance to build a team of eight. The challenge was kept a secret, so team members were chosen to cover different disciplines of study.

Receiving the challenge the next morning, students had 12 hours to complete the assigned task. This demonstrated the student’s ability to work under pressure and communicate effectively. The undergraduates worked together to design and develop the assigned project without step-by-step instructions.

“Our task was to create a satellite that would launch from the surface of the Earth, proceed to low-Earth orbit where it would rendezvous with the Hubble Telescope, use a robotic arm to grab on to the Hubble, and redirect it into an orbit back to Earth where it would impact into the Spacecraft Graveyard,” said Kruszewski.

At the end of the day, presentations were given by students to the board of directors who scored each team and chose the challenge winners. Kruszewski and Milnes’ team of students won the entire challenge through their combined knowledge and skills.

According to Kruszewski and Milnes, the engineering challenge was good for the university because it provided another way to get the students involved and excited about engineering.

If another challenge is planned, “I would definitely want to go if they invite us back,” said Milnes.