Community leaders and their guests visited Edwards Air Force Base in Southern California through the Honorary Commanders Program May 11, 2018.

The Edward’s Honorary Commanders Program builds awareness of the daily work done at Edwards and also develops working relationships between the base and local community leaders. Community leaders hold their position in the program for two years.

The group began the day with a visit to the munitions flight where they began the tour in the munition storage area where bombs are kept. Personnel are specially trained to handle bombs ensuring they are always safely handled.

The group also had the opportunity to see where bombs are assembled. There are numerous types of bomb components creating different effects. The type of nose and tail used on a bomb depends on the target.

Next, the group visited the test cell, which is a multifunctional facility able to run different types of jet engines. The facility was built in 1955. Engines are ran in the test cell facility to determine if there is a problem before maintenance is conducted. After the work is completed, the engine is run again to ensure all problems have been corrected before being reinstalled on an airplane.

The commanders learned how engines are placed on a test stand and air is drawn into the intake of the engine. The exhaust goes into a pipe that defuses the heat when it reaches approximately 700 to 800 degrees then water is added. The water cools the exhaust creating steam as the engine runs. 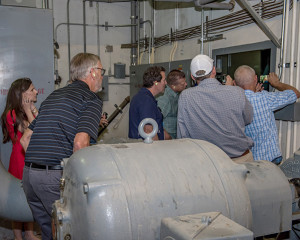 Honorary commanders watch a test run of a jet engine. Engines are run in the test cell facility to determine if there is a problem before and after maintenance is conducted to ensure all problems have been corrected before being reinstalled on an airplane.

According to Greg Perrier, 412th MXG production superintendent, if water was not added to cool the exhaust down it would “blow the side of the building off.”

They are able to measure thrust, pressure, temperature and vibration of a jet engine in the test cell. Cameras record the test in case of catastrophic failures of the engine.

“The most interesting part of the tour is the depth and dedication of all the presenters, whether military or civilian personnel,” said Greg Garrett, City of Tehachapi city manager. “I appreciate their commitment and their profound knowledge of what they are doing for Edwards Air Force Base, our military, citizens and the United States of America.”

The group then visited Hanger 1600 where a presentation was given by Senior Master Sgt. Joseph Armijo, 412th Aircraft Maintenance Squadron Wing Weapons manager.

According to Master Sgt. Jason Buffell, weapons superintendent, there are about 285 weapons personnel that are either qualified or trained to load weapons onto a B-1, B-2, B-52, F-15, F-16, F-22, F-35, MQ-1 and MQ-9 aircraft with over 35 munition variants. Personnel are divided into a fighter crew or a bomber crew. 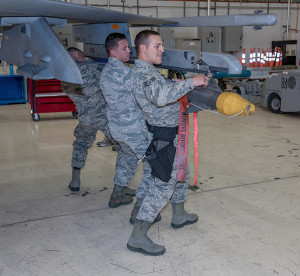 Next on the schedule was a tour of the 412th Aircraft Instrumentation Test Squadron. Steve Ewart, squadron director, showed examples of airplanes needing some type of modification. Modifications can be identified with orange parts and wiring. Every airplane is unique and different so no one system will fit every airplane, according to Ewart. Edwards test aircraft routinely need to collect and send data from test sorties and special equipment needs to be installed on the plane. The color orange indicates the part(s) are not original to the plane. The collection of data is the primary mission at Edwards.

The honorary commanders were then given presentations by the electrical engineering and mechanical engineering shops explaining how they design one-of-a-kind components for aircraft, which concluded the “maintenance for flight test” tour.

“The maintenance group tour was fantastic and provided everyone a glimpse behind the curtain at what it takes to make our flight test operations happen,” said Lt. Col. Zachary Schaffer, 418th Flight Test Squadron director of operations. “I’ve been stationed at Edwards for a cumulative six years and saw things I never had before, which really goes to show just how diverse a mission set the test wing has.”

The next honorary commander event will be in August and will highlight the Air Force Research Laboratory, also called the “Rocket Lab.”