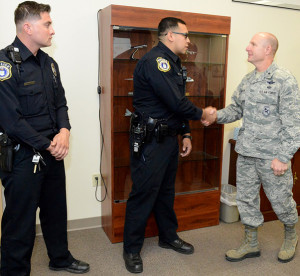 Officer Joseph Montano was also credited for his actions but was not able to attend the meeting.

On April 24, Plant 42 security was notified of a vehicle gaining unauthorized entry through one of the gates. A civilian man with no affiliation to Plant 42, followed a car through a gate and did not stop for security. A security vehicle manned by Plata was able to stop the “gate runner” by pulling out in front of him. Montano and Madrid responded from the gate to back up Plata.

The officers drew their weapons on the individual and ordered him out of the vehicle, which he initially refused stating that they would “have to shoot him.”
“He said, ‘what are you going to do? Kill me? Kill me, kill me,’” Plata said.

After a while, the officers were able to coax the individual out of his vehicle and handcuff him while he still resisted.

The Los Angeles County Sheriff’s Department responded and placed the man under arrest for trespassing and attempted assault on the two officers.

Schaefer commended the officers for their professionalism and noted that incidents like this are why security forces Airmen are some of his favorite people.