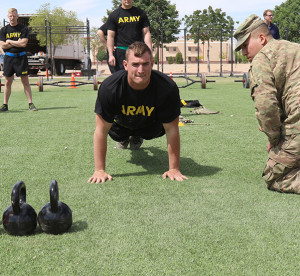 Soldiers assigned to 1st Stryker Brigade executed the proposed Army Combat Readiness Test (ACRT) on Ready First Field, April 17, 2018. Soldiers are assisting the Army with this pre-decisional testing that is pending senior Army leadership staffing and approval. The proposed ACRT is part of the Army’s effort to optimize Holistic Health and Fitness and improve Soldier readiness.

The U.S. military’s mission is to fight and win the nation’s wars, and service members must be physically, mentally and emotionally ready to fight when needed, Army Command Sgt. Maj. John W. Troxell said in an interview May 10, 2018.

And in this tumultuous era, that could be at any time, the senior enlisted advisor to the chairman of the Joint Chiefs of Staff added.

Troxell attended the inaugural DOD Readiness and Resilience Workshop held April 17 at Fort McNair in Washington. The workshop featured speakers and covered topics to optimize human performance through the body, mind, and spirit.

“He’s in good shape,” the sergeant major said of the deputy defense secretary.

Be ready for the ‘worst day’
Troxell said he constantly tells service members they must always be ready to engage in combat, which he describes as the “worst day.”

Troxell said he’s concerned about recent statistics regarding the ability of military members to deploy.

Defense Secretary James N. Mattis recently came out with a deployment and readiness policy. Essentially, the policy stipulates that if a service member is nondeployable for more than a year, then he or she is processed for separation. This does not affect service members wounded in combat.

“We have this deployability problem in terms of injuries and obesity — we are talking about 100,000 service members,” Troxell said. “On top of that, 17 percent of the troops have been diagnosed as overweight or obese.”

The sergeant major said he brought together civilian and military fitness and dietary experts to discuss fitness, performance, nutrition and recovery at the Fort McNair workshop.

“I brought in 50 service members from around the services who are high-speed individuals — the Marine martial arts instructors, master trainers from the Army, the Navy brought in a number of medical folks and dietitians,” Troxell said. “It was a lot of very physically fit people who were there to speak with each other and share best practices and strategies to address the obesity and the nondeployability problem.”

“Our special operations force[s] already do this very well, and there’s episodes in the services where it goes well,” he said. “But there are too many cultures out there where fitness training is just something we do for an hour in the morning and it is a ‘check the block’ kind of thing.” 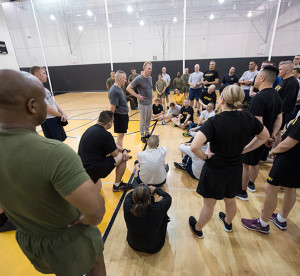 Army Command Sgt. Maj. John W. Troxell, senior enlisted advisor to the chairman of the Joint Chiefs of Staff, hosts a physical training session with Deputy Defense Secretary Patrick M. Shanahan and service members from across the joint force at the inaugural DOD Readiness and Resilience Workshop at Fort McNair in Washington, April 17, 2018. The workshop featured speakers and covered topics to optimize human performance through the body, mind, and spirit.

“What physical training needs to be is a process to get someone prepared physically, mentally and emotionally for the conditions they may face on the worst day of their life,” he said.

That worst day comes in a variety of guises, Troxell said. For a Soldier or Marine, it may be armed individual combat. For a sailor it could be dealing with disaster and firefighting. For an airman it could be in a convoy or on an airfield where disaster strikes or an enemy attacks.

“In any event, we shouldn’t be training to pass a fitness test,” he said. “We would be training for what we need to do on that worst day. We don’t do that enough.”

In extreme cases, there are service members who have been nondeployable for three or four years, the sergeant major said. Someone else still has to go. The sergeant major described one specialty with just 32 people. Only eight are deployable and they shoulder that burden.

Physical fitness helps mentally as well, Troxell said. “It’s a medical fact that the more physically fit you are, the more mental and emotional preparedness you are going to have,” he said. “You are already used to pushing against boundaries in physical training. You have already conditioned your body and your mind to handle adversity in training and that has a payout when you go through the worst day of your life.”

Medical experts who deal with post-traumatic stress say that developing physical fitness is a factor in combating that condition.

“I want those mid-range noncommissioned officer and the petty officers to own this,” he said. “They need to say there won’t be unfit people in their formations. They have to have people they can count on physically, mentally, emotionally, technically to thrive on the worst day. They shouldn’t be discovery learning on the worst days of their lives that the buddies next to them can’t carry someone out of a bad situation.”

Regardless of how good the U.S. military is, bad things can happen and “we have to prepare, and it starts every day with this culture of ‘I am a warrior/athlete,'” Troxell said.

He practices what he preaches. Troxell has embraced a tough physical training program. The 54-year-old senior NCO still qualifies in the Ranger School five-mile standard in under 40 minutes.

Passing a physical training test requires a 60 percent score. “We can’t be a 60 percent force,” Troxell said. “We have to strive for perfection.”