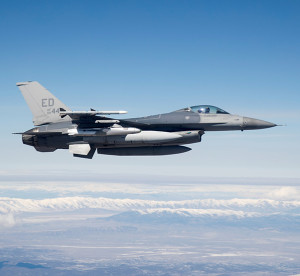 The JSM is Norway’s advanced anti-surface warfare missile designed to be carried in the new F-35As internal weapons bay. The missile can be employed against sea- and land-based targets. Norway is a partner nation in the development of the fifth-generation Joint Strike Fighter.

Before proceeding with integration testing on the F-35A, the JSM was tested at Edwards Air Force Base, Calif., on F-16 Fighting Falcons from the 416th Flight Test Squadron.

“The F-16 is a much more proven and mature platform in terms of technology development,” said Collin Drake, 416th FLTS JSM project engineer. “The F-35 is still undergoing its own technology development and design iterations, which brings its own challenges. It made it a lot more efficient and effective to use F-16s to be able to test mid-cycle a new type of weapon.”

Drake said the weapons development program at Edwards began in 2015. The JSM missile system was matured and proven with ground testing, captive carriage testing (flight test missions to ensure the weapon would perform its designed functions prior to being released from the aircraft), and live-drop testing to verify the JSM’s ability to be safely released from the aircraft and perform its autonomous functions. 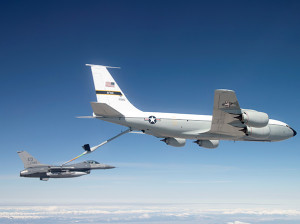 An Edwards KC-135 Stratotanker refuels a U.S. Air Force F-16 Fighting Falcon while it carries a developmental test version of Norway’s Joint Strike Missile. When development is complete, the JSM is intended for use aboard the F-35A Lighting II. The 416th Flight Test Squadron recently wrapped up JSM testing.

Testing included multiple variants of the JSM that increased in complexity and capability throughout the course of the program with the first JSM being a glide-only weapon with an active autopilot, but without a live engine, according to Drake. The next several tests used a version of the JSM that still did not have a warhead, but had a live engine and navigation avionics. The different variants proved the JSM could sustain extended periods of flight under its own power and successfully navigate over different terrain.

All variants of the JSM were inert until the final flight test events where it actually hit a target with full mission systems software and guidance. Throughout the test program, numerous software and hardware changes and updates were made. All live releases of the weapon were conducted at the Utah Test and Training Range.

“The multi-national test team, including the 416th, was able to work with the weapon developer over the course of the program to improve the JSM in an incremental fashion, which has resulted in a reliable and high-performance missile system,” Drake said. “It was an enormous milestone to release the final, all-up-round weapon.”

Edwards AFB’s airspace, personnel, assets and the American-Norway alliance make it the ideal situation to test the JSM.

An Edwards KC-135 Stratotanker refuels a U.S. Air Force F-16 Fighting Falcon while it carries a developmental test version of Norway’s Joint Strike Missile. When development is complete, the JSM is intended for use aboard the F-35A Lighting II. The 416th Flight Test Squadron recently wrapped up JSM testing.

“The weapons ranges needed simply don’t exist in Norway. So they were able to come here and utilize the Edwards airspace and ground test facilities for the captive carriage flight and ground testing. The 416th FLTS has a long and storied history of testing systems with our foreign partners, especially with Norway. Norway has been a partner in F-16 development since its inception, so it was a natural fit to work with the Norwegian Ministry of Defense to make this technology development program a reality. The 416th is equipped to provide flight test expertise and is adaptable to accommodate the testing of first-of-its-kind hardware and software, such as that of the Joint Strike Missile,” said Drake.

The next step is for the Norwegians to integrate the JSM on to the F-35 Joint Strike Fighter and then on to further weapons and integration testing.

“The team and myself are very proud to have played a part in the success of this multi-agency, multi-national test program,” said Drake. “It has been an honor and a pleasure to work with the many organizations involved, whose technical prowess came together to certainly be greater than the sum of their parts.”