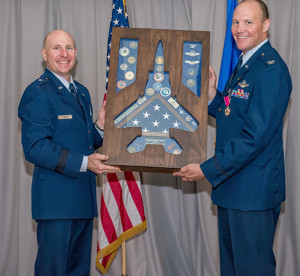 Base leadership, family and friends came together at Club Muroc at Edwards Air Force Base, Calif., to celebrate the career and accomplishments of Col. Jason Schott during his retirement ceremony June 14. The 412th Test Wing’s former vice commander retires after more than 25 years of active duty service.

“This is a sad day for me,” said Schaefer. “It’s a day I did not want to see come, but it is a celebration day for this family.”

The general introduced the Schott family and thanked them for all their support throughout the years and gave a special thank you to the parents of Schott.
“When you see a son or daughter here in the air force celebrating this kind of milestone, they have already arrived with core values of integrity, service, excellence in all they do,” he said. “I want to thank you for allowing him to serve his nation in the one percent that raised their hands to support and defend the Constitution of the United States.”

Schott received his commission in 1993 as a distinguished graduate from the U.S. Air Force Academy. He served as an instructor pilot, flight examiner and developmental test pilot. He is a graduate of the U.S. Air Force Test Pilot School at Edwards and a command pilot with more than 2,800 flying hours in over 30 aircraft variants. 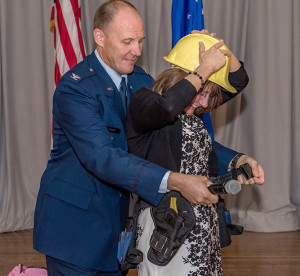 Col. Jason Schott gave his wife, Emily Schott, a hard hat and tool belt as a gift to help construct the house they plan to build in Colorado during his retirement.

Schott thanked everyone for coming to celebrate his retirement.

“The fact that you would take time out of your busy day is very meaningful to me. You honor me and my family by being here.”

At the end of the ceremony the vice commander made some closing remarks.

“I’m proud to have served with all of you,” said Schott. “I know that at this time of my life I need to achieve a different balance in my life, but you’re going to carry out the important work because America is an ideal that’s worth sacrificing for.”