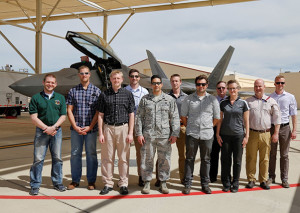 Rich in Air Force history and a hallmark installation in the Air Force test world, Edwards Air Force Base in California is home to the 412th Flight Test Wing and the world-famous Test Pilot School.

In late spring, members of the Arnold Air Force Base Junior Force Council had the opportunity to experience one of our fellow Air Force Test Center bases, Edwards Air Force Base, located in the California’s Mojave Desert.

The inaugural visit by the JFC to Edwards was part of the Arnold Engineering Development Complex JFC’s initiative to enhance the team’s knowledge of another test base’s interdependency with our mission at Arnold and to increase communication and build a larger network through further integration of the Air Force Test Center worlds. Additionally, this provided the team from Arnold a fascinating opportunity to be around an active flight line and see firsthand the impact that the instrumental work completed at Arnold has in flight test and the continuing development of our nation’s defensive technology.

In total, 10 JFC members traveled to Edwards — eight from Arnold AFB, and two from one of AEDC’s geographically separated missions — the National Full-Scale Aerodynamic Complex (NFAC) at Moffett Field, near the city of Sunnyvale in Northern California. The NFAC is best known in the test community for having the largest wind-tunnel in the country.

For any fan of aircraft, the sound of F-35s, F-16s, C-17s taking off and flying overhead is music to their ears.

“It was a symphony of airpower and freedom,” remarked Capt. Michael Davault of the Space and Missile Test Branch at Arnold AFB.

Additionally, the team was given the chance to tour the Air Force Research Laboratory at Edwards, discovering there is more than just hypersonic research being performed by AFRL. The team had the opportunity to tour the AFRL Rocket Lab, Liquid Rocket and High Altitude Rocket Test Facilities, Vacuum Chamber facilities, and the Precision Impact Range. 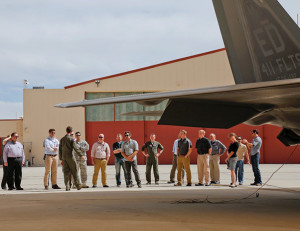 Members of the AEDC Junior Force Council get a lesson in the F-22 Raptor during a tour from Civilian Test Pilot Chris Liebmann of the 411th Combined Test Force at Edwards Air Force Base in California.

“Overall, the trip was an excellent opportunity for us to learn from Edwards and vice-versa,” said JFC President Stephen Maccarino. ”For example, we learned that the 411th Combined Test Force had sent engineers to Arnold Engineering Development Complex for wind tunnel tests, and they believe this was extremely valuable and encouraged future collaboration.”

Maccarino also drove home the importance of communication that the teams from Arnold and Edwards both agreed upon during their time together.
“There is so much that we can learn from each other and often we are working to solve similar problems,” he said.

The JFC will be looking to further this initiative and make additional trips to Air Force Test Center locations.

Big kudos goes out to Nicholas Perry from the Edwards AFB Ridley Mission Control Center for helping set the trip up and to all the hosts at Edwards for their time and hospitality during the team’s visit.

“The Edwards team was phenomenal. Everyone was engaged and spirited in their part in the mission,” said JFC Secretary Becky Morris.