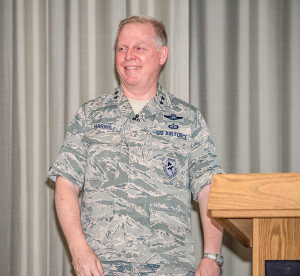 Harris has led AFTC for the past three years and is set to retire from the Air Force following a change-of-command ceremony scheduled for Aug. 3.

After recognizing more than a dozen local award winners, Harris expressed his gratitude and reflected on the work of the 412th Test Wing.

“In whatever capacity you serve, you are doing awesome work,” said Harris. “In a thousand years little kids are going to study world history like we study the Egyptians and the Babylonians and the Romans. They are going to open their text books and there will be a whole chapter on the great American peace, where science and technology, quality of life, medical and all the other fields just blossom under American protection, and you’re the ones providing that American protection.”

Harris has served 31 years in the Air Force and said he wishes it could be 31 more.

“It’s just been an awesome, awesome career for me.”

As commander, Harris directed a $31 billion enterprise of more than 18,000 military, civilian and contractor personnel across Edwards AFB, Eglin AFB, and Arnold Air Force Base in Tennessee. The AFTC provides developmental test and evaluation of experimental and research manned and unmanned air, space and cyber systems for military services, DARPA, NASA and international partners, in addition to operation of the U.S. Air Force Test Pilot School.

The general said he plans to spend some time after retirement with his family and wished Edwards the best.

“What makes you happy is working hard towards an important goal, where people recognize your contribution,” Harris said. “That’s what happens in the United States Air Force. I’m afraid I’m going to be miserable not having it, not being able to look out over an audience like this and say these guys are my tribe, this is my team and I love every one of them. I love the mission, I love the smell of jet fuel in the morning — smells like victory.”