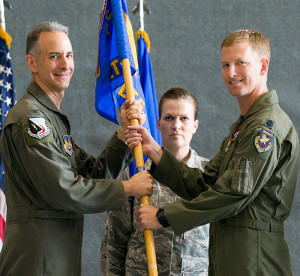 Meagher takes over from Lt. Col. Miles Middleton who has commanded the squadron since 2016.

Meagher is a graduate from the U.S. Air Force Test Pilot School (Class 11B). He previously served as the director of operations for the 586th Flight Test Squadron at Holloman Air Force Base, N.M., providing test support for over 50 programs utilizing T-38 and C-12 aircraft.

Meagher has more than 1,900 hours of flying time in more than 35 types of aircraft.

As 419th FLTS commander, Meagher will oversee the developmental test and evaluation of B-1, B-2 and B-52 bomber aircraft to include maintenance, flight test engineering, flight test operations and weapons upgrades for America’s bomber fleet.