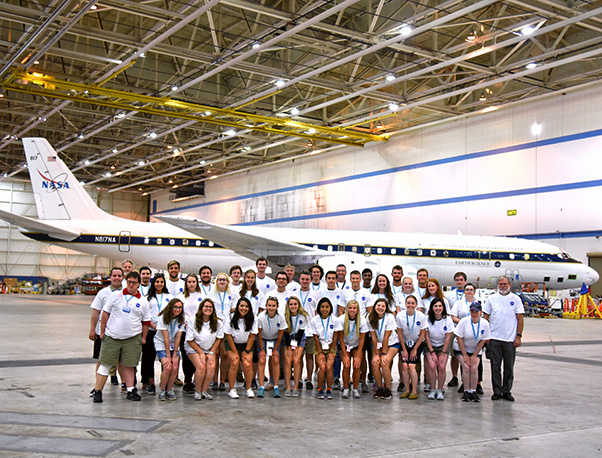 Embarking on its tenth year, NASA’s Student Airborne Research Program, provides a unique opportunity for undergraduate students majoring in the sciences, mathematics and engineering to participate in all aspects of a NASA Airborne Science research campaign. Flying aboard NASA’s DC-8 airborne laboratory, students will sample and measure atmospheric gases to study pollution and air quality in the Los Angeles basin and in California’s Central Valley.

Students will also use remote sensing instruments on NASA’s ER-2 to study drought, fire burn scars and debris flows in Southern California and ocean biology along the California coast. In addition to airborne data collection, students will take measurements at field sites near Santa Barbara, Sequoia National Forest, and the Salton Sea. These ground-based measurements will be used for calibration and validation of measurements taken by the aircraft teams and will also serve as complementary data set for students to use for their individual research projects.

SARP participants are given a rare behind-the-scenes look at the instrument installation, flight planning and scientific data collection that is the basis of every successful Earth Science airborne campaign carried out by NASA. These campaigns play a pivotal role in the acquisition of process-oriented knowledge about the Earth system, as well as calibration and validation of NASA’s space-borne Earth observations, remote sensing measurements and high-resolution imagery for Earth system science.

SARP began June 18 at the Armstrong Flight Research Center Building 703 in Palmdale, Calif., with lectures by university faculty members, NASA scientists and NASA program managers. The students were scheduled to fly onboard the DC-8 on three flights during the week of June 25.

They will overfly dairies and oil fields in the San Joaquin Valley, and will sample the atmosphere in the Los Angeles basin, Santa Barbara Channel, and the Salton Sea at altitudes as low as 1,000 feet in order to collect air samples and measure atmospheric gases such as methane, carbon dioxide, carbon monoxide, nitrogen oxides, and ozone in-flight.

The final six weeks of the program will take place at the University of California, Irvine where students will analyze and interpret the data they collected onboard the aircraft.   In addition to the new data collected, students can use data gathered by SARP participants during the previous nine years of the program to compare with current observations.

At the conclusion of the program, each student will deliver a final presentation on his or her results and conclusions in front of an audience of NASA scientists, university faculty members and their fellow SARP students.  Many students have gone on to present their SARP research projects at national conferences, frequently at the annual fall meeting of the American Geophysical Union.

Students participating in the 2018 SARP represent 28 different colleges and universities from 20 different states across the country. They were competitively selected based on their outstanding academic performance, future career plans and interest in the Earth System Science.

The Student Airborne Research Program is one of NASA’s tools for exposing future scientists to the Earth Science missions that support environmental studies and the testing and development of new instruments and future satellite mission concepts. The program’s goal is to stimulate interest in NASA’s Earth Science research and aid in the recruitment and training of the next generation of scientists and engineers, many of whom will be getting their first hands-on research experience during this program.

Jack Kaye, Associate Director for Research of NASA’s Earth Science Division said, “SARP provides a fabulous opportunity for these students to get hands-on experience in Earth System science using NASA’s unique combination of aircraft, sensors, systems, and people. The experience will likely have a lifelong impact, in part by helping them better understand their interests as they contemplate their post-college plans.”

Of the 277 students that have completed the SARP program, 93 percent have moved on to science, technology, engineering or math (STEM) related careers or are pursuing additional STEM education.