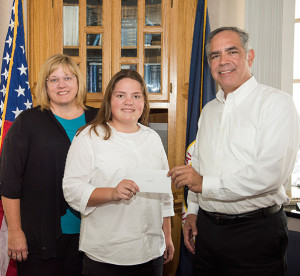 Askins is a 2018 graduate of Tehachapi High School in Tehachapi, Calif. She is seeking a major in civil engineering at Rensselaer Polytechnic Institute in Troy, New York, this fall and is set to play NCAA softball for the institute’s team, called the Engineers. She earned a 4.22 grade-point average and graduated in the top 2 percent of her class.

“I was shocked at first that I was chosen out of all the qualified applicants,” Askins said. “This scholarship will be very, very helpful toward college and earning my education.”

The scholarship provides $2,000 per year for up to four years for attendance at a four-year college or university, providing the recipient maintains a minimum grade-point average of 3.0 or higher. Applicants for the annual scholarship must be high school seniors with a parent working as an Armstrong civil service or contract employee.

Erin Askins is the daughter of Dana and Paul Askins of Tehachapi. Dana Askins is the NASA Armstrong Human Resources director for the Human Capital Management Branch. As director, Askins is responsible for leading a team that provides a range of services including planning, developing, coordinating and delivering Armstrong’s human resources programs.

“I was thrilled when I learned Erin had won the scholarship,” Dana Askins said. “It is a scholarship opportunity that could be available for four years. She has worked so hard to be ready for college and this is a signal that she is ready.”

In 2017 and 2018, Askins was selected to a summer internship at NASA Armstrong, where she worked on systems integration of the flight computer and data acquisition systems on the Prandtl 3C subscale aircraft with other interns under direction of Armstrong’s Chief Scientist Al Bowers.

Her problem solving, critical thinking and work ethic helped her earn a Rensselaer Medal scholarship for distinguished academic achievement in mathematics and science. She was a member of the National Honor Society, serving as treasurer and a member of the California Scholarship Federation. In addition to excelling in advanced placement and honors classes during her high school career, Erin Askins was active in numerous school and community activities.

She also participated in athletic programs, serving as captain of the varsity softball team and earning back-to-back First Team All-League MVP honors, in addition to back-to-back first team all-area honors. Askins was active in the Tehachapi High School Marching and Concert bands, where she was trombone section leader. She was a youth volleyball coach volunteer for third and fourth graders at the Tehachapi Valley Recreation and Park District. She was also a volunteer at the Tehachapi Pops Orchestra.

Exchange council scholarships are named for former employees of the NASA center, with honorees selected on a rotating basis. Walker was the Aerodynamics branch chief and was associated with the X-15, XB-70, lifting body aircraft, the supercritical wing and oblique wing projects. Scholarship funds are raised from various council activities, including proceeds from vending machines, Armstrong Gift Shop, the Armstrong Flightline Eatery food court sales and fundraising events.