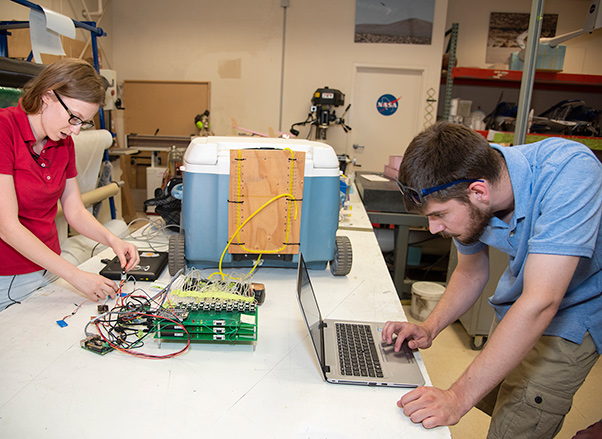 Abbigail Waddell and Nathaniel Boisjolie-Gair test a pressure system they and other students developed for the subscale Prandtl-D 3C glider.

Abbigail Waddell leaned over bundles of wires and circuit boards to see if a system she had helped develop with other interns for two summers at NASA’s Armstrong Flight Research Center in California was ready for testing.

Waddell, who attends North Carolina Agricultural and Technical State University, where she is studying electrical engineering, adjusted the electronic pressure measurement system, or EPM, and nodded to signal it was ready. Chris Jensen, who is a mechanical engineering major at Embry-Riddle University in Prescott, Ariz., blew air through a large rubber tube and a gauge indicated the pressure was rising, as Jensen continued to blow.

Nathaniel Boisjolie-Gair, who is studying mechanical engineering at North Dakota State University, monitored a computer screen to see if the system was measuring the pressure of Jensen’s breath. Stephen Harris, who is studying electrical engineering at John Brown University in Siloam Springs, Ark., made sure data were recording. The test was a success. 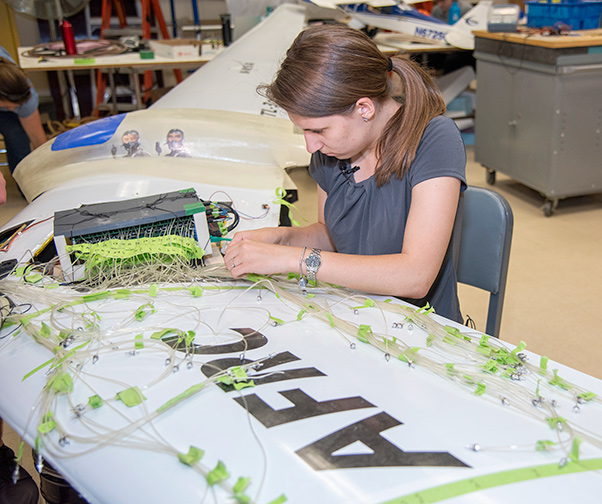 Deborah Jackson integrates a pressure system she and other students developed for the subscale Prandtl-D 3C glider.

Along with nine other interns, the students assisted Armstrong Chief Scientist Al Bowers with developing, testing and integrating the system into the subscale Preliminary Research Aerodynamic Design to Lower Drag, or Prandtl-D 3C glider. A flight series Aug. 1 demonstrated their system could measure pressure from the surface of the aircraft’s wing, providing additional evidence that a wing design method using twist can dramatically increase aircraft efficiency.

Before the aircraft was ready for flight, however, there was more work to do. With the system validated, students crafted a box for it with a 3D printer. Then the system was installed in the aircraft. Deborah Jackson, an aerospace engineering student at Embry Riddle, Prescott, Arizona, was one of the students who meticulously helped connect each of the 89 tubes from the system along the glider’s wingspan. The small plastic tubes were also attached to transducers, which convert the air pressure on the wing to electronic data, and then to pressure points all along the glider’s wing.

During the previous two summers, Jackson worked on the Fiber Optic Sensing System flown on the aircraft, which gathered data last summer on strain on the aircraft’s wing. This summer, she is helping seek similar data through pressure on the wing. So far, it looks like the two methods are yielding the same answer.

“The variety of experience that I have been able to get is the best part,” Jackson said. “I worked in the electrical engineering lab and now I am working as an aerospace engineering student. I have learned so many things that are going to make me a better engineer and a better individual. I can also see the bigger picture.”

With all of the connections made and additional ground testing and the necessary preflight reviews complete, the students were ready for flight. The weight of the new system made the aircraft heavier toward the nose, and without a breeze the July 26 flight was limited, but data was acquired on the first try. The team tried again Aug. 1 and this time a light breeze helped the flight tests. After a few successful attempts, students carefully made measurements and computations and shifted the weight for the aircraft to fly even better.

“The wind picked up and it began flying faster, which allowed us to get clean pressure data for the whole wing,” said flight operations lead Victoria Hawkins, who is a graduate student focusing on unmanned and autonomous systems engineering at Embry-Riddle in Daytona Beach, Florida. “Doing flight research and not just writing a theoretical paper about how it will be tested is exciting, and being in charge of it, it’s on me if the flight fails or not.”

With the data in hand, the students were able to use computer programs they had scripted to see what story the data revealed. 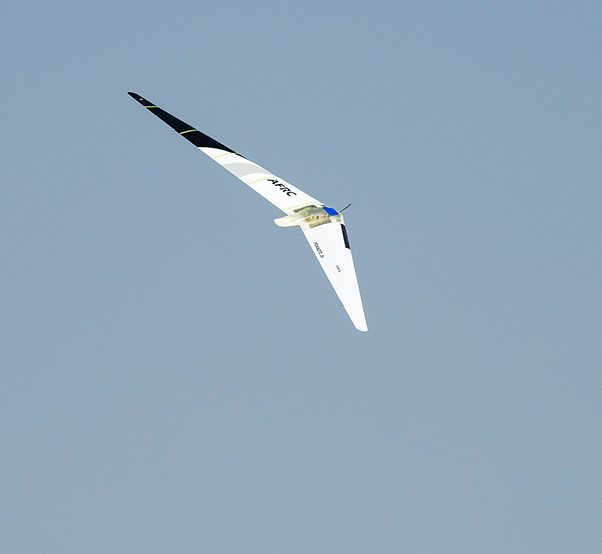 The subscale Prandtl-D 3C glider, carrying a pressure system developed and integrated by students, successfully flies at Edwards Air Force Base in California.

“The box is recording all of the pressures along the wing for us and we are going to add them all up,” Bowers said. “We are going to look at these and slice across the wing in various ways to see what the load is from the centerline all the way out to the wingtip and see if it matches the Ludwig Prandtl 1933 paper that detail the best solution for aircraft wing efficiency. So far it looks really good.”

Bowers said other data systems students developed will give additional information about what is happening to the aircraft in flight.

“We are looking at the aircraft’s acceleration, the gyroscopes that tells you how quickly the aircraft is turning around its three axes, as well as the airspeed and altitude. That gives you the full picture of what’s going on,” he said.

Combined with the models, the FOSS data and now the pressure data, there is a compelling argument for wing twist.

“The comparison of this data and FOSS data are not complete yet, but the hairs on my arm are rising because I know we are going to go back to the 1933 paper and show that we have validated what Prandtl did,” he said.

“We know the mechanics of what it has done before, we have seen the reaction of the vehicle that shows we get thrust at the wingtips, which was the focus of the previous paper that we wrote,” Bowers said. “These tests validate that the aerodynamics are what we said they were and all of this matches Prandtl’s work. These bricks in the wall makes the argument irrefutable.”

That’s where the students will continue to have impact long after their internships are completed.

“A future generation will use this data to increase efficiency. This is the capstone. You now have all the information you need to go forward and use this. It goes beyond aircraft and the word is starting to get out.” 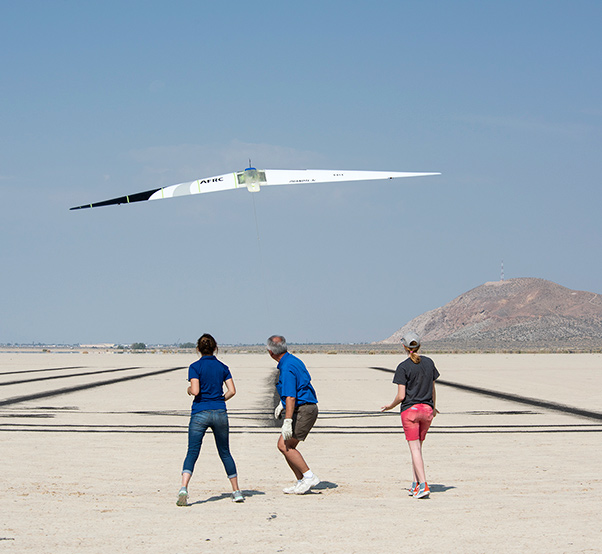 “This will truly change the way the world works,” he said. “The savings in energy, not just for aircraft but for ships, for fans, for pumps, turbines, compressors, all of those things are going to change because of this.”

The wing efficiency from the method would be 12.5 percent, with the elimination of a tail increasing efficiency by another 30 percent. For propellers, efficiency would boost by 15.4 percent, Bowers said.

“We have cracked the door open,” Bowers said. ““We are looking forward to working with young people in these areas as they influence professors and get people to approach these areas differently. They also get people looking at the world differently.”

David Berger, Armstrong’s University Affairs officer, said the opportunities are what the Armstrong Office of Education is all about and 10 students participated in this summer’s Prandtl-D 3C effort.

“We are helping to provide opportunities for students,” he said. “It’s meaningful not only as a learning experience, but also by contributing to NASA’s mission. This answers the question of if theory matches reality. This flight series is validation of a major research initiative.”