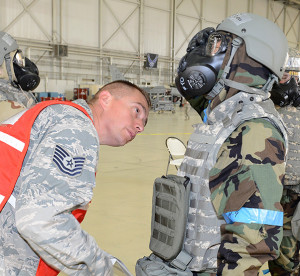 The U.S. Air Force wants Airmen to be war-ready. That’s why from Aug. 7-9, approximately 80 Airmen at Edwards Air Force Base, Calif., prepared to go to war in Test Wing Readiness Exercise 18-03.

While many Edwards Airmen are not strangers to deploying, this exercise focused on full spectrum combat readiness, according to exercise planners, which is a theme in the 2018 National Defense Strategy, and reflects the priority of chief of staff of the Air Force, Gen. David Goldfein, which is to restore readiness to the force.

Once directed to “deploy,” Airmen reported to a pre-designated area simulating a forward operating location, which in this case was Hangar 1600. Once assembled, the Airmen were placed into four-person teams with the purpose of competing against similarly arranged teams in an “ability to survive and operate” scenario that takes place in a chemical, biological, radiological and nuclear environment.

The Airmen traversed from station to station while donning their mission oriented protective posture, or MOPP gear, performing tasks while being graded by Wing Inspection Team members. 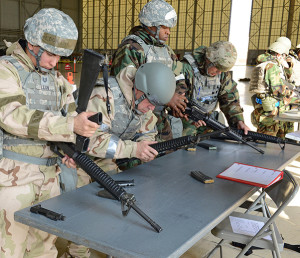 “As a test wing, it is unlikely we would face such an event as the wartime mission here is test and evaluation,” Dohnke said. “However, individual active duty servicemembers and small teams at Edwards are only a world event or disaster away from being tasked to deploy in support of our national defense objectives. This could happen outside the scheduled [Air Force Central Command] deployments that have been the norm over the last decade.  Airmen, and their supervisors, must be ready.”

Dohnke added the entire Edwards team came together to make the exercises a success with the help of almost all groups and squadrons providing support. He also said the base can expect so see more exercises like this to remain in line with the Air Force’s priorities.

“This is the new normal; active duty servicemembers can expect to participate in similar events quarterly,” said Dohnke.

Wing leadership will recognize the winning team of the exercise competition at a later date.