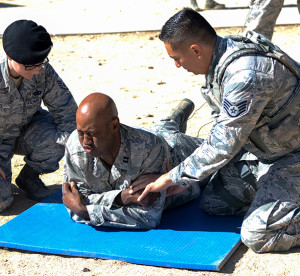 Chaplain (Capt.) Richardson Honore gets tased by 412th Security Forces Squadron personnel as part of a capabilities demonstration at Edwards Air Force Base, Calif., Sept. 13, 2018. Honore serves as the 412th SFS chaplain and volunteered to be tased in order to get a better understanding of different stress factors that defenders face every day.

His voice can be heard through the hallways of the 412th Security Forces Squadron headquarters at Edwards Air Force Base, Calif.

It is loud and commanding. Though his voice doesn’t instill a feeling of uneasiness or dread, rather it invokes a smile. When Airmen hear his laugh, they know the chaplain is in.

For Chaplain (Capt.) Richardson Honore, being where “the rubber hits the road,” means being out in the field with the 412th SFS’s Airmen. To him, being visible out at the gates or at training events at Edwards Air Force Base with the Airmen helps facilitate a more resilient Air Force.

He calls it the “ministry of presence.”

“Because you’re in their house, you’re being visible, being accessible, being transparent, being available at all times,” he said. “And when they know after a while of seeing you, you get respect and knowing you’re here and you’re serious, and you’re keeping your word.”

While it may be common for Airmen to think a chaplain always works out of an office at the base chapel, Honore believes in being out in the field with his Airmen.

“If they’re training, I’m training with them, so it’s not really just the office but it’s being out in the field with them as well,” Honore said. “I’m visible, I’m there, and I’m bringing stuff out to them.”

Honore, along with the other squadron chaplain, Chaplain (1st Lt.) Ferman “Jay” Clark, make it a point to visit their Airmen wherever they may be working or training. During the week, Honore and Clark can be seen visiting defenders at the base gates or working out with them doing physical fitness training. However, the highlight for Airmen may be when they see the chaplains’ hot dog cart.

“I can throw down!” Honore proudly proclaims. Although Clark would argue otherwise. Their banter over how to best cook hot dogs shows the Airmen a level of personality and camaraderie that they may not be accustomed to.

“I go to all three different gates, dropping off food and to provide support, so they see me there, they see me with them,” Honore said. “When I’m there I can make observations, affect change and redirect how they approach certain situations, at least from the perspective of dealing with relationships and people.”

Honore believes that there is a need for security forces to have an in-house chaplain because of the nature of their duty, which is inherently high-stress. He compared their work to a cup and how his work can keep the cup full.

“The defenders have the ability to shut down the base, or to keep it open. It’s a lot of responsibility, it requires a lot of focus, a lot of attention, a lot of finesse, a lot of different skill sets and a lot of training. If there’s a leak in the cup, then it’s problematic,” Honore said. “I’m trying to patch those leaks, I’m trying to keep the cup full. If they can’t operate fully and be viable, then you can see the repercussions of that.”

Honore added that a defender’s home life or personal life can affect their performance on the field in the line of duty. An Airman cannot fully perform his or her duties if they aren’t able to concentrate on it because their attention is elsewhere.

The chaplain explained that one of his philosophies deals with understanding the correlation between an Airman’s personal life and his or her professional life. From a business management stand point, a decrease in quality of work due to personal reasons can be costly, both in monetary value and in time.

“My philosophy is; if you can take care of the whole person, then the mission can be accomplished, if you do not take care of the total person, then it’s very expensive, it costs money, it costs time and many man hours,” Honore said. “So I can translate what we do here into money, into time, into man hours. If there’s something going on with a defender, and something happens with their family which causes high stress now, and is not dealt with or addressed, then they can’t give you 100 percent.

“Now if you’re talking about 50 defenders going through things, that’s a lot of deficiencies, that’s a lot of time to make up for. If we can take care of that aspect, then the mission just flourishes,” he said.

Clark agrees that supporting defenders build resiliency affects the success of their mission.

“I see our job in supporting them as they support the mission as one of restoring and rebuilding resiliency in order to clearly work toward the end goal of fulfilling their mission to defend and to remind each individual of their importance to the success of the mission,” Clark said.

Honore’s path to chaplaincy started at a city college in his home of New York where he was working toward a mechanical engineering degree. He said he always felt a calling that followed him through a univeristy stint in Alabama. And by the end, he had a degree in math, computer science and theology. He then commissioned in the Air Force Reserve as a chaplain and now is on active duty orders at Edwards. 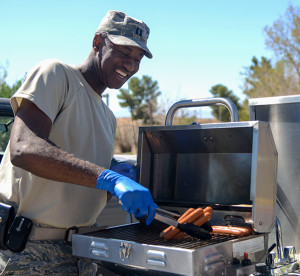 The chaplain uses lessons he’s learned during his youth in New York in the way he approaches talking to his Airmen.

“I love it, I absolutely love being the chaplain of the defenders, I love their intensity,” he said. “I love the drama, I grew up in kind of tough neighborhood in New York, and so this is kind of like home to me.

His form of personal outreach and connection makes Honore endearing to his Airmen. He said that his personable approach lets him talk to the Airmen on a more individual level. It gives his Airmen a viable person to talk to which builds their resiliency, he said.

“It has opened up the door, people just want to see you be real, I realize, people want to know that you are real. I tell them I got my own issues. I got my own drama that I got to go through, but you know what? I’ve learned how to go through them, and maybe I can help you go through yours. But you’re not the only person who has problems, you’re not alone.”

Security forces Airmen and chaplains may not seem like the world’s most practical partnership, but Honore and Clark both believe they have had a positive and profound impact on the lives of security forces Airmen. Honore provides an opportunity for Airmen to de-stress and relax during their busy day providing base security.

“I can, with certainty, say that a number of the security forces Airmen have expressed a healthy measure of gratitude for the time and effort that has been offered to them, especially by Chaplain Honore,” Clark said. “It is a neat experience to see him walk down the hallways and people light up and look forward to having a conversation with him.”

With a big, genuine smile, Honore greets every Airman he sees walking down the hallways of the SFS headquarters. Honore’s infectious laugh carries throughout the building. To Honore, a smile and a simple “what’s up, ‘chap’?” means he is accomplishing his mission. Flame-broiled hot dogs, topped with chili and cheese also help.