Members from engineering and technical support company JT4 and the 418th Flight Test Squadron use the newly created Receiver Simulation Tool on a KC-10. The RST is a ground-based system designed to simulate events that happen during aerial refueling between receiver aircraft and new tankers such as the KC-46 Pegasus, Australian KC-30 and Italian 767. The team has been testing the RST with legacy tankers such as the KC-10 and KC-135 to get baseline data before testing on the new aerial refuelers.

Leadership across the Air Force want their workforce to focus on innovation every day, whether it is making things better, more efficient, or saving money.

A small team at Edwards Air Force Base, Calif., can now check off all those boxes with their custom-built test tool designed to cut down test costs and time.

Members from engineering and technical support company JT4, the 812th Aircraft Instrumentation Test Squadron and the 418th Flight Test Squadron, created the Receiver Simulation Tool, which is a ground-based system designed to simulate events that happen during aerial refueling between receiver aircraft and new tankers such as the KC-46 Pegasus, Australian KC-30 and Italian 767.

“The RST has two elements, the mobile control room and the fuel rig element, which is modular so it can be transported in a KC-10 all over the world in case we want to go test foreign customers,” said Hans Lambrecht, JT4 lead project engineer for RST.

According to Lambrecht, the primary role of the RST is to measure surge events that can occur during mid-air refueling. If the refueling surge pressure during a tank valve shut-off is not properly dampened by the tanker surge suppression design/equipment, then a wet or flowing disconnect of the refueling boom could occur. If surge pressures exceed the design limitations of the fuel components on either aircraft, a catastrophic failure might occur. To avoid this situation, flow rates might be throttled down or shutoff early, which could result in receiver aircraft not getting a full exchange of fuel.

“The main thing for Global Reach is to top off the fuel tanks on a receiver aircraft,” said Lambrecht. “Mission planning works a lot better if you get a full jet in the air with full-range capability. The goal is to be able to test this on the ground without having to instrument every receiver aircraft in the air and collect the data in flight, which would be more expensive when you can do it on the ground and get a good picture of what’s going on.” 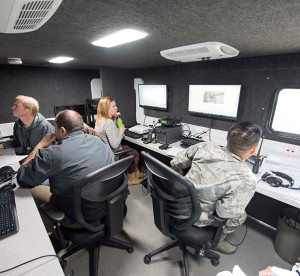 Members from engineering and technical support company JT4 and the 418th Flight Test Squadron sit in the mobile control room of the newly created Receiver Simulation Tool. This is where aerial refueling simulation tests are monitored and recorded. The RST is a ground-based system designed to simulate events that happen during aerial refueling between receiver aircraft and new tankers such as the KC-46 Pegasus, Australian KC-30 and Italian 767.

Lambrecht added the RST has the ability to select one of four different line diameters then throttle using valves controlled by the operator inside the RST’s mobile control room to get different flow rates and fuel line velocities. Once “steady state” is achieved at the desired test point, testers then can conduct a “closure event” at different rates and measure the surge pressure wave that occurs during and after that event to characterize the surge suppression response of both legacy and new tankers to compare threshold deltas.

The RST was built at Edwards with mostly customized parts. Lambrecht said even the tires of the mobile control room are custom made.

About two years ago, the RST was born when Air Force Materiel Command and DOD required testing of coalition tankers, according to Lambrecht. He said AFMC asked Edwards if this was something the test center could handle. Steve Parker, 418th FLTS Instrumentation Flight Chief, went to JT4 (at the time called JT3) and asked if this was in their capacity.

“We asked our brothers at JT3 if they had the resources to support and they did,” said Parker. “From the beginning through development, JT3 engineered, designed, procured, built, test, documented, and validated RST, and now we have a fully functional RST system ready for use on universal tanker assets.” 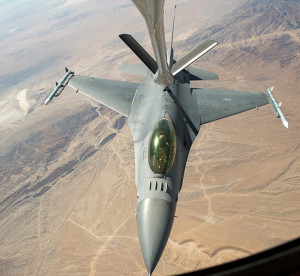 Lambrecht said the 418th FLTS has been using the RST with legacy tankers such as the KC-135 and KC-10 to get baseline data before testing on new tankers coming soon such as the KC-46.

“It will help bring new tankers online in a cost-effective, rapid way,” said Lambrecht. “It saves money because you don’t have to instrument all the different aircraft when conducting aerial refueling tests. You now have a ground-based rig that is fully instrumented where tankers can just back up into and conduct tests. You can knock out those data points in three days where in the past you had to fly for months with different receiver aircraft to get the same, if not lower-level, data.”

Lambrecht added that his team worked on building the RST part time while supporting other test missions.

“It was a lot of work, but it was fun to bring a new capability to the Air Force,” Lambrecht said. “A lot of my engineers learned a lot through the process and we’d love to do something else to help save the taxpayers lots of money or enhance mission capability for the war fighter.”