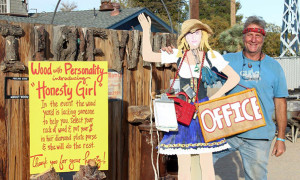 U.S. Air Force veteran Timothy Hynes stands with Honesty Girl, who collects money 24/7, rain or shine, at The Ranch — a self-help wood service that started 20 years ago when Hynes asked his Boeing coworkers if they would like to go in on a semi-truck load of wood.

Always up for an adventure or challenge, U.S. Air Force veteran Timothy Hynes, 59, was wondering if maybe he chewed off a bit much when he came to the Mojave Desert in 1978.

At 17, while still a senior at Longwood High School on Long Island, N.Y., he signed up for delayed enlistment and was in basic training before he turned 18. Scoring high in the electronics field, he went on to technical school in Biloxi, Miss., and became an Avionics Communications Specialist. Edwards Air Force base was the first choice on his ‘Dream List.’

“I took the Greyound from New York to Los Angeles. I remember passing Mojave and Plant 42 and thought, ‘Wow! This is cool, the base is by Plant 42!’”

He had to take another bus from Los Angeles to Lancaster where an airman picked him up in a super large tow truck and delivered him to Edwards. “The guy hated it so much, he couldn’t wait to leave. From Lancaster to Edwards all I heard was how much this airman hated being here — I thought I was going to cry.” Hynes thought he would be close to civilization working at Plant 42, but was informed he would be in a remote spot, working on Edwards, without remote pay. “Every teenager wants to go to California — and I thought, here I am in the middle of the desert!”  It was a far cry from the eight-acre farm and the Swiss Chalet he and his four siblings grew up in, or close to the beaches he had always dreamt about.

At Edwards, he worked on nearly every aircraft in inventory.

His father, Jerry, worked as a general contractor and had plenty of heavy equipment that he and his brother, Stephan, learned to operate, while most kids their age were working on getting their bicycle training wheels removed. They also had a quarter-acre garden, kept bees, made honey, had a smoke house, hunted, fished and spent many hours digging oysters and clams in a local harbor off the Long Island Sound. “We had plenty of responsibilities, which has helped me throughout life. We took care of the gardens and animals. I spent many hours pulling weeds.” 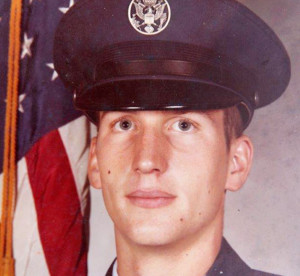 Young man — Airman Timothy Hynes signed up for delayed enlistment with the U.S. Air Force at age 17, his senior year at Longwood High School on Long Island, N.Y. He became an avionics communications specialist serving at Edwards Air Force Base and worked on nearly every aircraft in inventory except for the F-15s and F-16s.

His mother, Anny Marie Besch, was born in Luxembourg and came to America by boat, while working as a personal assistant to Mrs. DuPont, the family whose fortune was founded on explosive powders and textiles. She met Tim’s father, who was enlisted in the U.S Coast guard at the time, at a USO dance in New York. They were married for 55 years until she passed away in 2009. “When my mom passed away, I bought a Kubota tractor with her life insurance money in memory of her.”

After serving four years at Edwards, he ended his commitment and hopped on a “space A” flight to Europe and traveled for three months from Sweden to Crete and everywhere in between, including a stop in East Berlin, passing through “Check Point Charley.”

“The Berlin wall was still up.  It was very surreal going from West Berlin to East Berlin. From having access to everything, then literally having access to very little.  East Berlin seemed run-down, bleak and empty. Storefronts had little to almost nothing to offer and the money we exchanged in the west was hard to spend, as if I remember properly, the exchange was one West German Mark to eight East German Marks,” explained Hynes.  After running out of money, he returned home to New York and began to work for a local contractor doing manual labor.

“I started at nine dollars an hour, which was pretty good back in the day, doing shovel work, welding, fixing heavy equipment — anything that need to be fixed or built, that’s what I did.”  One day, while walking home after work, a friend asked him why wasn’t he working for the Grumman Aircraft Corporation, makers of the F-14 Tomcat. “I told him I applied but didn’t get a response; he said he would hand deliver my resume.” A week later, Hynes was working for Grumman.

“The Air Force flew in 42 of the worst F-111s, mostly hanger queens, that we stripped down to bare structure and turned them into EF-111 jammer models.”  He worked there for about nine months until he heard Boeing was hiring in California. Missing the desert and the friends he left behind, he quit Grumman and accepted a job with Boeing Military Aircraft Company.

“I started on aircraft number four, B1-A, then transferred to Palmdale to begin testing of B1-B, ship one, in May of 1984.  Working and testing each and every bomber all the way up to the final delivery of A/C 100.” He then transferred to the Integrated Facility for Avionics Systems Testing (IFAST) at Edwards. After several years he went back out to the flight line. “I really liked working hands-on, being outside with the aircraft, uploading software on computer systems, modifications and systems testing to ensure critical operations.”

One of his favorite things about working for Boeing was being a traveling technician. He went to Dyess AFB, Texas, Ellsworth AFB, S.D., and Northrup Grumman in Baltimore, Md., often to work on prototype projects. Throughout his Boeing career, he endured six months of strikes and 20 months of layoff.  Hynes wasn’t idle during downtime. He worked as a carpenter in Savannah, Ga., rebuilding a guest house, floating dock and other projects for his sister and spending time with his family, who relocated there from New York. He became a member of a sailing club, enjoyed some “fine southern comfort style romance” before returning to California. “I think that was actually some of the best times of my life,” he smiles. 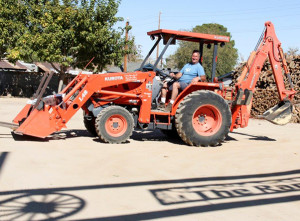 In honor of his mother, Hynes bought a Kubota tractor to help with his wood business at The Ranch, in Lancaster, Calif. Hynes’ strict upbringing prepared him for the military, Boeing and the rewards of hard work.

On weekends, while living in Lancaster, Hynes would drive through the desert picking up 2×4’s and construction wood that people had dumped as trash. “After a while I thought I would buy some good hardwood but soon found out how costly it was. I went to work and was talking with a co-worker, who told me I should buy a whole truckload of Almond wood. I took a poll at work to see who wanted in on the semi-truck load.” He put up the money and took delivery.  Some friends reneged on the deal so he had plenty of wood left over. “Soon, people driving by would stop and ask if I would sell them some, so I did.”  To this day, he is selling almond and other cooking/smoking wood and even ships wood to restaurants across the country.

At age 58, Hynes decided to retire to pursue traveling and spend more time enjoying friends. He visits hot springs whenever time allows, which he claims is his R & R and getaway. Although sometimes he doesn’t actually “get away.” As a matter of fact, last weekend while camping in Death Valley, someone brought in wood for a communal fire pit and it looked like almond wood. He asked the person were he got it and indeed, he bought it at The Ranch — which is Hynes self-help wood service. “I don’t know if that is good or bad, that I can recognize my own firewood,” he laughs. When Hynes is not available to collect money from his clients for wood, he depends on and trusts his customers to pick up their rack of wood and drop their money in “Honesty Girl’s” purse who is on duty, 24/7, rain or shine. “I put trust out there with hopes that it comes back — and it does.”

This year he experienced Burning Man while serving at an Emergency Service camp and helped an artist set up her display. “It’s quite an experience that may not be for everyone, but I found it to be something I needed to experience at least once my lifetime.”

Joining the Air Force was one of the best things Hynes could have done for himself.   It got him to where he is today. “If the desert hasn’t grown on you in three years, you probably should not be here. I used to call it the fricken’ desert, now I call it the fabulous desert.”