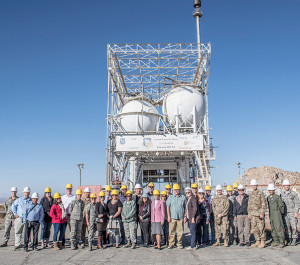 Honorary commanders pose for a photo in front of rocket engine test stand during a tour of the Air Force Research Laboratory “Rocket Lab” at Edwards Air Force Base, Calif., Nov. 9, 2018

Edwards Air Force Base, Calif., Honorary Commanders wrapped up the end of their assignment with a tour of the Air Force Research Laboratory’s Detachment 7, “Rocket Lab,” at Edwards Nov. 9, 2018.

Honorary commanders is a two-year pledge that matches local civic and business leaders with Edwards AFB leadership to further enhance the partnership between the base and the local communities around it.

“This is regrettably our last tour, but it’s been a phenomenal 24-month assignment,” said Dick Taylor, Patriots of Kern president. “We really have enjoyed ourselves and we hope that it’s been a mutually beneficial relationship with the base.”

Taylor was the former director of the Kern County Veterans Service Department and was assigned with the 812th Civil Engineering Squadron commander during his time as an honorary commander. His partnership with the engineering squadron afforded him and his staff the chance to learn about the fire department and the explosive ordnance branch.

“With the engineering squadron, the fire department and EOD, we have a greater understanding of what they do to keep the military, civilians and dependents safe on base,” Taylor said.

For their final tour, the honorary commanders toured the AFRL’s Rocket Lab. The commanders saw an internal view of a facility that many of them have only seen from afar, Taylor said. 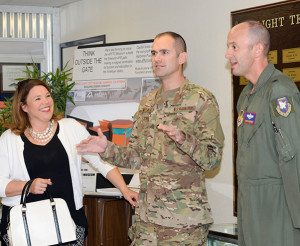 “It was a phenomenal opportunity to see that thing, which for my entire life driving on Highway 58, only saw these fixtures on top of a mountain. Up close, it’s all these engine test stands and we actually got to go back in and see the other 98 percent that you can’t see from the highway,” Taylor said. “We also got to meet some phenomenal people that just make us proud as Americans that work hard to keep America safe and test these rockets and to see things that most of the public don’t get to see.”

For the Rocket Lab personnel, it was important to showcase their facility because the general public normally does not have access to the laboratory, said Lt. Col. Jonathan McCall, AFRL Det. 7.

“They do so much for the Air Force and the nation’s defense that no one sees because we’re up on this hill,” McCall said. “They love their work and are genuinely excited to show it off; so I jump at any opportunity to let them do that because talking about it energizes them.”

McCall also said that it’s vital for local and civic leaders to be able to see some of the work done at the Rocket Lab to get a better understanding of the Edwards mission.

“It’s absolutely vital. We not only employ over 500 people regularly, but have several connections to local, state and national space industry partners. Not to mention the industrial supply piece and university partnerships,” McCall said. “We are very plugged into the Antelope Valley, but we’re also not as vocal about it as we could be, for security reasons. So being able to tell a few key community leaders about ourselves and having them tell their contacts, and so on, ensures we’re able to do our mission and everyone benefits.”

For commanders like McCall, the importance of the honorary commanders program is that it helps him build and foster relationships between the Air Force and local communities.

“I love the honorary commander program because it supports relationships we wouldn’t otherwise have time to cultivate, on both sides,” McCall said. “Commanders are only in their positions for two years; that’s not long enough to make community partners on its own, so this program helps accelerate that. On the other side, the community leaders get to see in detail how big an effect base activities have on them. Plus it fosters patriotism and understanding across the base fence line.”