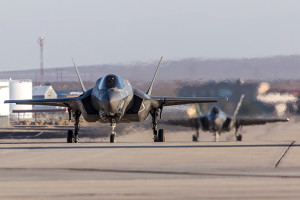 Hamilton explained that pilots could become disoriented from a variety of scenarios including target-fixation or Gravity-Induced Loss of Consciousness. In the case of a probable ground collision, the Auto GCAS would activate, take control from the pilot and return the plane to safe altitude and attitude.

The Auto GCAS utilizes sensors on the plane, terrain data and other various on-board monitors to determine a probable ground collision. Based on the plane’s trajectory, speed, and lack of input from the pilot, the system then calculates the best way to recover to a safe trajectory. Edwards AFB plays an integral role in the testing and development of the F-35 Auto GCAS, gleaned from experience during the F-16 Auto and F-22 GCAS development. Edwards also shaped the programatics of the capability, advocating for fielding earlier than originally planned on behalf of the war fighter.

“We understand the technology very well at Edwards because we developed it here. We’ve been able to be an advocate to the warfighter, and the F-35 enterprise as a whole, to get them to accelerate implementation of F-35 Auto GCAS by about seven years,” Hamilton said. “It wasn’t supposed to get in the F-35 for another seven years from now, and we’re flying it today.”

“This technology is the stepping stone to increased combat capability via a fully capable combat autopilot that will be able to execute tactical maneuvers to defeat inbound kinetic and non-kinetic threats and maximize lethality through precise weapon employment,” expressed LeClair. “The future F-35 pilot is going to be a lethal battlefield manager with automated tools at his fingertips to ensure survivability and lethality.”

One of the key points of the test flights is to make sure the Auto GCAS is compatible with the F-35’s other onboard computer systems.

“Whenever you have this type of technology, the first objective is to do no harm,” Hamilton said. “You don’t want this technology to cause an accident, or a collision with the ground. One of our jobs as flight testers is to ensure that it does no harm to the operator; that it doesn’t have any nuisance issues; everything is working the way it’s supposed to, we give it the ‘safety thumbs up,’ and then it’s able to go out to the fleet and save lives.” 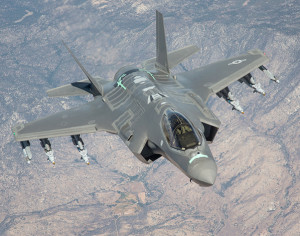 An F-35 Lightning II from the 461st Flight Test Squadron at Edwards Air Force Base, California, soars over the Mojave Desert on a test sortie.

Although the system is designed to save lives, Hamilton warned pilots should not be over-reliant on the system.

“The pilot cannot use Auto GCAS as a crutch.  It’s very important they do everything in their power to execute the mission without relying on any safety net to protect them. They’ve got to execute not thinking it’s there, they should execute with that mindset; and then if it saves them, it saves them,” Hamilton asserted.

According to LeClair, the current success and advanced implementation of the Auto GCAS has been a total team effort.

“The development of the Auto GCAS has been one of the most rewarding missions I’ve undertaken at Edwards. To be able to see it come to fruition in the F-35 early has been extremely rewarding,” Hamilton said.

The push to develop, test and evaluate the system is rooted in the command’s commitment to the war fighter, both on the ground and in the air.

“We know we’re going to save lives. People will be able to go home to their families. Men and women that would have died can now be saved, and it’s all about the warfighter,” Hamilton said. “We need to protect our brothers and sisters in arms. It is our responsibility to use the technology to be able to bring them home every day, that’s something they deserve and it’s something we have the capability to provide.”