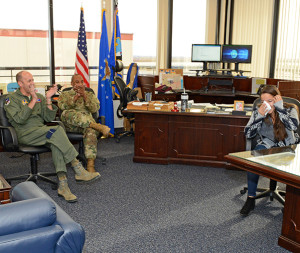 A visit to the general’s office turned into a life-changing event for one Desert High School senior Nov. 27, 2018, at Edwards Air Force Base, Calif.

In the middle of their conversation, Teichert’s conference call phone rang. On the line was Congressman Kevin McCarthy, R-Calif., 23rd District, who to Rodriquez’s surprise, asked to talk to her.

“I thought I was just going to get more advice and mentoring from the general and Chief Jones,” said Rodriguez.

But what she got was a full congressional endorsement from current House Majority Leader McCarthy who gave his blessing for Rodriguez to attend the Air Force Academy.

After being overcome with emotion, she jumped up to hug her mother, Lorena Rodriguez, who is a nurse with the 412th Medical Group.

High performing high school students who wish to attend a military service academy must complete two requirements — be accepted to the academy and have an endorsement from their local congressman or congresswoman.

“Who wouldn’t want to attend the Air Force Academy?” asked Rodriguez. “So many leaders graduate from there; it’s where I’ve always wanted to go. I will be challenged and it will make me a leader and set me up for success.” 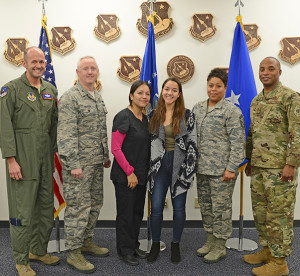 Rodriguez says she wants to major in biology and one day become a doctor in the Air Force.

“The Edwards leadership has been great,” Rodriguez said. “For months they have been giving me advice and guidance on how to apply to the Air Force Academy. Chief Jones and (former wing commander) General Schaefer opened up their doors to me and I was able to just talk to them and get their advice.”

Along with mother Lorena, the aspiring Air Force officer’s father, Richard, also works at Edwards at the 412th Maintenance Squadron.

Rodriguez is still waiting to hear on her acceptance to the academy, but has one important step completed.