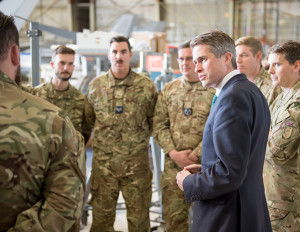 Secretary of State for Defence Gavin Williamson CBE with members of the Royal Air Force’s No. 17 Squadron, which is the organization on Edwards Air Force Base responsible for the operational test and evaluation of the U.K.’s F-35 Joint Strike Fighter, Dec. 2, 2018.

Secretary of State for Defence Gavin Williamson CBE (Commander of the Most Excellent Order of the British Empire) visited the U.K. component of the F-35 Joint Operational Test Team at Edwards AFB for a program brief on U.K. F-35 Lightning II testing. He also met with his countrymen from the Royal Air Force’s 17 Squadron who are stationed at Edwards.

Williamson was given a tour of the JOTT facilities by Edwards U.K. leadership and was afforded the opportunity to sit in the cockpit of one of the U.K. F-35s.

According to the U.K. government, Secretary of State for Defence Williamson has overall responsibility for the business of the department including strategic operations and operational strategy; defense planning; program and resource allocation; strategic international partnerships; nuclear operations policy and organizations; and strategic communications.

Williamson was appointed Secretary of State for Defence Nov. 2, 2017. Prior to that, he served as a member of Parliament and worked as a business executive.

The JOTT conducts operational test and evaluation of all variants of the new F-35 Joint Strike Fighter, which includes several allied nations along with the U.S. Navy, Marines and Air Force.