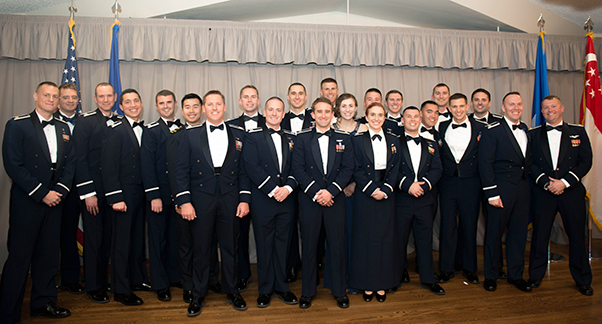 Each graduate crossed the stage to receive the graduate plaque from TPS, the diploma from Air University, the graduate coin and the coveted TPS Graduate patch.

The graduation is the culmination of an intense, 48-week program that transforms top operational pilots, navigators and engineers, into elite flight test professionals.

Following the formal dinner, retired U.S. Marine test pilot and NASA astronaut, Col. Frederick Sturckow, went up to the podium as the featured speaker of the evening. Sturckow is a U.S. Air Force Test Pilot School graduate who would be a part of four space shuttle missions. He described one mission to the International Space Station where, along with fellow TPS graduate Col. Kevin Ford, they experienced a problem and had to shut down a thruster. They managed to maneuver their spacecraft to the ISS with only simulator training.

“Where did Colonel Ford and I learn to do something never been done in an airplane before? Right here, at the U.S.A.F. Test Pilot School,” Sturckow said.

Sturckow advised the new graduates to be humble when they get to their new units and to be prepared to do the “dirty work” as well as the exciting things such as flying test missions.

“I’m here to tell you all that all the good flight test has not been done,” said Sturckow. “My hat’s off to you and I wish you the best of success and I’m jealous of all the cool stuff you’re going to get to do.”

Each student also participated in a Test Management Project during the year in which they planned, executed and reported on data for a Department of Defense customer, according to Col. Ryan Blake, U.S. Air Force Test Pilot School commandant.

Class 18A graduates join more than 3,000 alumni including 100-plus general officers and 60 astronauts.

Test programs across the Air Force Test Center and beyond integrate TPS graduates into test teams to shape the technology and weapon systems of the future for the Air Force, sister services and allied nations. 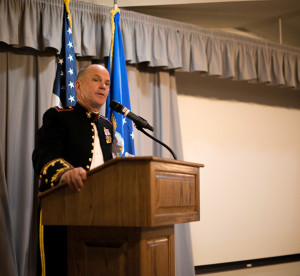 The Class 18A TMPs were:
Have BASS — The Bay Acoustics Store Separation (BASS) test team demonstrated the expanded envelope of the WAASP pod on the F-16.  The pod was used to conduct research on aeroacoustic effects on bay- mounted stores.