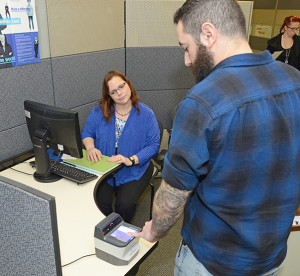 “I have the largest squadron at Edwards and I have 103 open positions,” said the director of the 412th Maintenance Squadron.

Dixon added that it could take up to 225 days to get a new employee on board.

With 80 aircraft of all different types and a busy flying mission, the 412th Test Wing at Edwards Air Force Base, Calif., needs qualified maintainers more than ever. That’s why the 412th Maintenance Group teamed up with the 412th Force Support Squadron Civilian Personnel Section, the 412th Logistics Readiness Squadron, the 412th Aerospace Medicine Squadron, and the Air Force Personnel Center Hill-OL Staffing Office to hold a one-stop hiring event Dec. 13.

The event hosted 16 prospective job candidates with aircraft maintenance backgrounds at Bldg. 3000. The candidates checked in, fingerprints where taken, then the candidates each sat down for a face-to-face interview. Those requiring drug tests and physicals were transported by a 412th LRS van to the Drug Demand Reduction building or the Flight Medicine office and later returned to Bldg. 3000.

“They will leave Edwards today with a tentative job offer in hand, and once the results of the drug tests and physicals come back next week, they will be sent official firm job offers,” said Michelle Lovato, 412th FSS Civilian Personnel officer.

This is the first one-day hiring event for Edwards, which is following a strategy outlined by the Air Force Sustainment Center.

Through the Direct Hiring Authority capability sanctioned through the 2017 National Defense Authorization Act, managers are able to hire candidates without requiring them to go through the full standard federal application process; aka USAJOBS. The DHA can expedite the hiring process by streamlining the recruitment process, eliminating the competitive rating and ranking, veteran’s preference process and authorizes hiring without regard to certain competitive procedural requirements, according to the AFSC.

The DHA can be a flexible tool to immediately recruit candidates for positions where there is a severe shortage or if a critical hiring need exists.

“The direct hiring event was advertised via LinkedIn and other social media platforms to invite interested candidates to pre-register via the Yello App,” said Lovato. “We have observed other success stories across Air Force Materiel Command such as events held at Robins and Hill Air Force Bases. Edwards has the ability to utilize the Temporary Direct Hire Authority for domestic defense industrial base facilities, the Major Range and Test Facilities Base, and the Office of Director of Operational Test and Evaluation as per NDAA, Section 1125.” 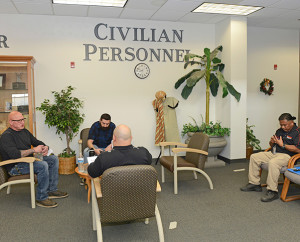 Maintenance job candidates sit in the waiting area on the second floor of Bldg. 3000 Dec. 13, 2018. The 412th Test Wing held a one-day direct hiring event where suitable job candidates were invited to Edwards Air Force Base in California to interview and conduct pre-employment requirements all in one day.

The aforementioned Yello app is a recruiting application that allows hiring managers and recruiters to build a repository that is easily accessible, according to Melida McWeeney, 412th Test Engineer Group, engineer recruiting manager. McWeeney assisted with the direct hire event.

“As my team of recruiters attend career fairs, tech talks, or outreach events, hiring managers can log into Yello on their PC or mobile phone to check progress of candidate connection,” McWeeney said. “The application has a built-in evaluation form that standardizes the way 412th TENG rates potential candidates. As the recruiting manager I am able to build fall and spring recruiting events and make all my events available to STEM recruiters. Yello has allowed Michelle (Lovato) and her team to begin vetting resumes now for her future hiring events. Candidates that are identified by hiring managers as a viable candidate will be contacted through Yello to upload additional supporting documents to support their hiring package”

Lovato said there is discussion on conducting another one-day direct-hire event for other mission critical occupations such as IT specialists, budget analysts, human resource specialists, logistics specialists and other occupations with high attrition rates.

“Edwards AFB is a remote and isolated location, which impacts our ability to hire civilians in hard-to-fill critical positions,” Lovato said. “This direct-hire event was conducted in order to meet mission objectives and address hiring challenges to onboard a new civilian in a timely manner.”