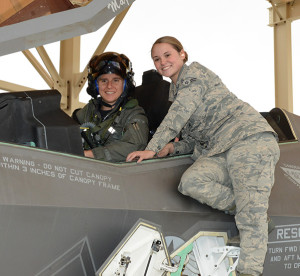 History was made once again at Edwards Air Force Base, Calif., when Maj. Rachael Winiecki became the first female F-35 developmental test pilot as she successfully completed her first flight test mission, Dec. 14, 2018.

Winiecki, from the 461st Flight Test Squadron, took off that morning in her F-35 Joint Strike Fighter, she was then greeted by members of the squadron after she completed her mission.

“I may be the first female developmental test pilot (in the F-35), but (test pilots) are just one small part of the test enterprise,” Winiecki said.

She said that although aviation tends to be a male dominated field, the number of women in flight test is increasing. Winiecki said that there are several female test directors, test conductors, discipline engineers, and flight test engineers at the 461st FLTS; in addition to those serving in engineering, maintenance and support functions. Namely, she spoke about her crew chief for the mission, Airman 1st Class Heather Rice, of the 412th Aircraft Maintenance Squadron.

“It was great having Airman Rice there,” Winiecki said. “I am very proud of the work she does on the line and I’m glad that she is part of our team.” 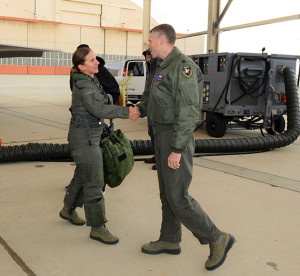 Before joining the 461 FLTS, Winiecki commissioned through the Reserve Officer Training Corps. Upon completion of pilot training, she flew the A-10C operationally including deployments to Southwest Asia, Eastern Europe, and the Pacific theater. She then graduated from the U.S. Air Force Test Pilot School at Edwards and was previously assigned as an F-16 test pilot with the 416th Flight Test Squadron.

According to Lt. Col. Tucker Hamilton, 461st FLTS commander, Winiecki’s experience with the A-10 was one of the factors to her being selected as an F-35 test pilot.

“Major Winiecki was selected to become an F-35 test pilot based on her exceptional flying ability and the important voice she brings to the F-35 development as a prior A-10 pilot,” Hamilton said.

Winiecki said that having the ability to bring the A-10 mission sets to the 461st FLTS, such as close-air-support, combat search and rescue and forward air controller, is important so the focus is not just on the air-to-air capabilities of the F-35 but also the air-to-ground capabilities.

“I really do appreciate the perspective that I can bring coming from the A-10 and the F-16 to hopefully bring some influence from that perspective. As testers, the contacts we have back in the Combat Air Force are valuable,” she said. “We can reach out to our networks to solicit feedback, solicit information on how we could and should accomplish our mission sets in the future. That’s really where we can open doors. I can reach back to my friends and contacts in my previous community just like other test pilots here.”

As a member of the 461 FLTS, Winiecki will be part of a team that oversees developmental testing of all variants of the F-35 JSF. 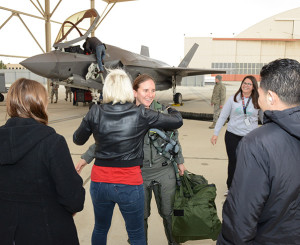 “I’m honored to have the opportunity to become part of the diverse team at the 461st. While there may only be a few individuals in these photos (of the event), there are countless dedicated personnel working hard to ensure we execute safe, secure, effective and efficient flight tests.”

After Winiecki concluded her first mission, she reflected not just on her milestone, but also on the other women who have contributed to the history of Edwards and the Air Force, while also looking to the future.

“I am grateful for the women who have broken barriers previously, they built the path,” Winiecki said. “I look forward to the day when sorties like this are a regular occurrence.”

The commander of the 412th Test Wing, Brig. Gen. E. John Teichert, noted that Winiecki’s accomplishment is another example of how Team Edwards continues to make history today.

“Major Winiecki’s accomplishments are exactly why we continue to be at the Center of the Aerospace Testing Universe,” said Teichert. “Breaking barriers is what we do, with history-making impact every day for the war fighter.”