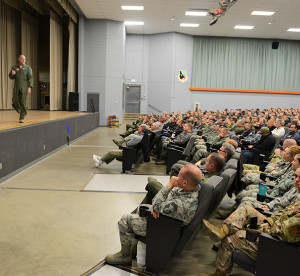 Before heading into 2019 full throttle, the 412th Test Wing at Edwards Air Force Base, Calif., took a pause to remind its workforce to be safe while conducting its test mission.

Everything from aircraft in-flight emergencies to workplace injuries were examined at the base theater during the annual Back in the Saddle briefing held Jan. 2.

Back in the Saddle combines mishap reviews from fiscal year 2018 with informational briefings for the workforce. Throughout the day-long event, testers had the opportunity to hear about lessons learned in 2018 both at Edwards and throughout the Air Force. The annual briefing is designed to help the workforce shift their focus back to safety and effectively accomplishing the test mission following the holidays.

Edwards remains busy and fast-paced, which involves a range of low- to high-risk tests every day. Brig. Gen. E. John Teichert, 412th TW commander, urged his workforce to use “exceptional risk management” and take time to assess things before they happen. He cited the concept of “presumptive anomaly,” which calls for examining established assumptions to make sure they are sound before carrying out a test.

“We don’t need to be trapped in a paradigm if we can forecast that our current assumptions could cause a crisis; we can snap ourselves out of a crisis without getting to it,” Teichert said. “One of my challenges to you is to think about your organization and what it is you need to reassess in your assumptions.”

The general said using “white space,” essentially a break from work to think about things, or asking organizational leaders to slow things down, could help prevent a crisis. 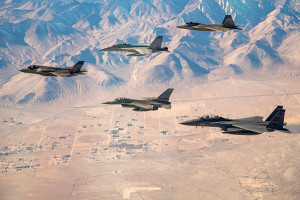 During the morning session of Back in the Saddle, Teichert also emphasized the need to keep innovating and for organizational members, both new and seasoned, to welcome new ideas.

“It frankly is just about doing things better; innovation is about solving problems,” said Teichert. “If there’s something you consider as a member of your organization, that just sitting here today is making you feel a little uneasy because of an assumption you haven’t questioned in a while, then use that concept of a presumptive anomaly to snap you out of a crisis before you get there.”

Overall, 2018 proved to be a very safe year for the 412th Test Wing. There were no major mishaps involving lost aircraft and there were no on-duty fatalities. However, base leadership at Back in the Saddle emphasized the need to reduce minor mishaps, which include workplace injuries and damaging equipment.

Examples of work-related mishaps for Airmen and civilian workers include slips and falls and injuries sustained while working on planes. Sports injuries during physical training or during off-base activities also led to lost work days for people in 2018.

Other subjects during the day focused on flying safety, airfield driving and test safety procedures and lessons learned.