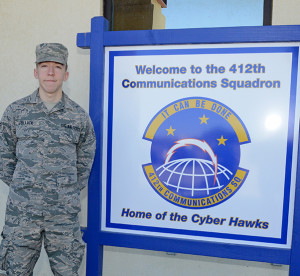 He hails from El Dorado Springs, Mo., where he enlisted in the U.S. Air Force. Edwards AFB is his first permanent assignment following basic military training at Lackland Air Force Base, Texas, and technical school at Keesler Air Force Base, Miss.

Pollack just completed his first semester of college and hopes to get a bachelor’s degree in cybersecurity and information assurance one day. He also hopes to get married soon after becoming officially engaged recently.

His hobbies include studying, exercising, playing video games and reading.

Some interesting notes, Pollack achieved an industry Security+ certification at age 17 and won a state level award for cybersecurity while in high school. He also played the alto saxophone for eight years.

Congratulations to Airman 1st Class Pollack for being selected as the 412th TW Warrior of the Week!