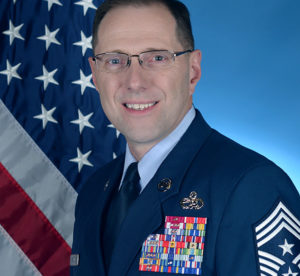 Air Force Chief Master Sgt. Stanley C. Cadell is the new command chief at Air Force Materiel Command. Cadell brings almost 27 years of Air Force service to the senior enlisted position at AFMC, where he serves as the primary advisor to the commander and senior staff on all matters pertaining to readiness, training and professional development of enlisted personnel across the command. He arrived at AFMC in February, filling the spot vacated by Chief Master Sgt. Jason France who transitioned to become the senior enlisted leader at U.S. Transportation Command in late 2018.

People make an assignment great, not the location, said the Air Force Materiel Command’s newest senior enlisted leader who is eager to get to know all of the military and civilian Airmen across the command as he settles into his role here.

“I want to get to know, listen and learn from all of you,” said Chief Master Sgt. Stanley C. Cadell, AFMC Command Chief.  “It’s exciting to be here at AFMC.”

An Illinois-native, Cadell brings 27 years of Air Force service to the senior enlisted position at AFMC, where he serves as the primary advisor to the commander and senior staff on all matters pertaining to readiness, training and professional development of enlisted personnel across the command. However, Cadell sees himself as more than just a leader for the enlisted force and hopes to use his voice to advocate for all military and civilian needs across the spectrum.

“I want to help Airmen, both military and civilian alike, to work through bureaucratic processes and help to open doors as an advocate for their needs,” said Cadell. “Two-way communication is key to our success as a command, and I will strive to make sure that messages are not only communicated and received downward, but to make sure our Airmen have the opportunity to be heard as well.”

A maintainer by trade, Cadell fits well in a command that has a strong mission based in logistics, maintenance and sustainment of Air Force systems. He started his career in 1992 as an aerospace ground equipment technician, with his first assignments overseas at RAF Upper Heyford, United Kingdom, and at Spangdahlem Air Base, Germany.

It was in these early assignments that Cadell learned the importance of hard work, education, opportunity and mentorship, each of which have played a key role in his career journey.

“Having great mentors and individuals willing to invest time in me really impacted my entire career,” said Cadell. “One area this really played out was in my education. I made excuses all of the time and said, ‘I just want to focus on being the best maintainer that I can.’ But, my first supervisor and mentor, Staff Sgt. Greg Vernon, told me that I needed to look to the future. He took the time to drive me to the education center, and I left there signed up to take my first college classes. Fast-forward, and two associate degrees, a bachelor’s and a master’s degree later, I recognize that education makes you smarter and helps you to do your job better. It opens up opportunities.”

As Cadell progressed in his career, leadership opportunities emerged, and he assumed his initial first sergeant position in 2005 at the 31st Services Squadron, Aviano Air Base, Italy. Since then, he has served as a first sergeant and command chief at the Air Force squadron, group, major command and headquarters levels.

“The heart and soul of who I am as a senior NCO (noncommissioned officer) I learned in those early years that I served as a first sergeant,” said Cadell. “As a maintainer you learn to fix things, but it’s not always as easy to fix a person. I learned those ‘soft skills’ and how to work with people in those early years, and that has influenced how I lead today.”

Cadell’s leadership philosophy is a strong reflection of a person-focused leadership style, and he believes that it is critical for a leader to be, “…approachable, coachable and willing to learn.”

“If people are afraid to come to you with their issues, then how can you help them?” said Cadell. “You also need to be willing to learn. It’s the only way you can know how you can help a person and determine the best ways to help them to do their job better,” said Cadell.

Key to all of this, continued Cadell, is attitude.

“Attitude reflects your leadership, and a positive attitude is contagious,” he said.

As Cadell transitions into his AFMC leadership role, he plans to focus on readiness and ensuring AFMC Airmen are resilient and equipped to meet Air Force needs. He will also push towards greater professional development for Airmen at all levels, which he believes is critical for ensuring the next generation of Air Force leadership.

“We need to develop our Airmen to be the leaders who will eventually replace us,” said Cadell.

Cadell recognizes that his leadership role does not come without challenges, particularly given the number of recent and near-term changes to Air Force policy that affect Airmen at all levels. These include changes to the physical fitness testing program, promotion and assignment systems, and more.

Once he settles into his AFMC role, Cadell intends to get out to meet the Airmen and the missions across the command footprint. In the meantime, he offers the following advice and challenge to Airmen across AFMC.

“You have to ‘earn it’ every day,” he said. “Know your job, and do your best to be good at your job. It’s what the American people expect of us when we put on the uniform each day. Have a positive attitude, and doors to opportunity will open. I am honored to serve with you and look forward to meeting you all.”