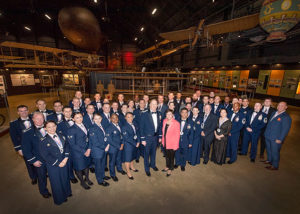 Air Force Material Command annual awards nominees are joined in the Early Years Gallery of the National Museum of the Air Force here, by Lt. Gen. Robert McMurry, AFMC commander, and Patricia M. Young, AFMC executive director, during the command’s annual awards banquet, March 6, 2019. Active duty and civilian Airmen from AFMC centers across the country came together to hear who would be named the best in their nine respective categories for 2018.

Senior leaders and well-wishers from across the command, joined Lt. Gen. Robert McMurry, AFMC commander, in the Modern Flight Gallery of the National Museum of the United States Air Force to recognize this year’s nominees and winners.

“Tonight we are here to recognize the cream of the crop,” said McMurry. “You are all what we aspire to.”

McMurry talked about how excellence in all we do is not the goal, but is the starting point. “That’s what these Airmen did. They started with excellence and raised the bar,” he said.

Chief Master Sgt. Jennifer Hellwig, AFMC first sergeant, expressed, “It is an honor and a privilege to recognize AFMC’s finest in the best red carpet event ever. This event will leave a lasting positive impression for all who were here to represent their centers. It was just simply amazing.”

McMurry closed by saying, “We are proud to be serving in the Air Force with these individuals. They work hard, use their minds, apply their creativity and energy, and use their elbow grease to get things done, and done right.”

Winners in the four enlisted categories will represent AFMC in the United States Air Force Outstanding Airmen of the Year and First Sergeant of the Year competitions held later this year.