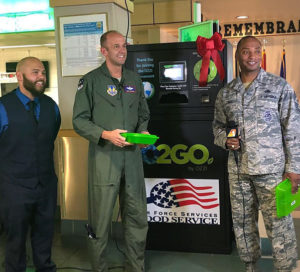 At the Joshua Tree Dining Facility at Edwards Air Force Base, Calif., Styrofoam containers have been the container of choice for grabbing a meal on the go.

After hearing complaints regarding this restriction, David Behrendt, 412th Force Support Squadron, was encouraged by leadership to ?nd a solution.

With the help of Master Sgt. Krisryan Borsil, Ray McMillan, and Courey Cobb, they were able to implement a reusable to-go container system at the dining facility, which has been in e?ect since last October.

Not only does this system reduce cost to below $3,000 a month, but it also reduces the environmental impact associated with Styrofoam containers. Other bene?ts of these reusable containers include being durable, holding food temperature longer and being microwave and dishwasher safe.

As a result of this innovative success story, Behrendt won 412th Test Wing Innovator of the Quarter for the third quarter of 2018.