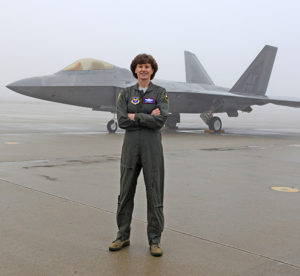 Maj. Gen. Dawn Dunlop, Special Access Program Central Office director, Office of the Undersecretary of Defense for Acquisition and Sustainment, poses for a photo in front of an F-22 Raptor at Edwards Air Force Base, California Feb. 1, 2019. Dunlop was accompanied by more than 80 fellow female aviators to take part in filming of an Air Force Recruiting Service television commercial.

In early February, roughly 80 female pilots gathered together on Edwards Air Force Base, Calif., to take part in the video filming of an Air Force Recruiting Service commercial.

The commercial was made to coincide with the release of the new film “Captain Marvel,” which also involved filming at Edwards.

One of the Airmen showcased in the recruiting video was Maj. Gen. Dawn Dunlop. Dunlop currently serves as the Director of Special Programs in the Office of the Secretary of Defense. She is also the highest ranking female fighter pilot in the Air Force today. Earlier in her career, Dunlop served right here as the 412th Test Wing vice commander and eventually the wing commander, the first woman ever to command a Test Wing.

“It was really quite remarkable,” Dunlop said. “My first thought was how appropriate it was that this event was taking place at Edwards — a base known for many firsts, and my second thought was how proud I was to see so many talented young women aviators making a positive mark on our Air Force. It is always special for me to come back to Edwards and walk the flight line where I’ve spent much of my career as a test pilot.”

Edwards AFB has been around for more than 85 years and the men and women here have enabled virtually every breakthrough in U.S. military aviation history from the first jet aircraft, to X-planes on the edge of space, to today’s F-35 development. Dunlop said she thought it was just appropriate that the Edwards AFB flight line became the stage for so many women aviators, representing just how far the service has come since it first opened the doors for women pilots in 1980 and combat pilots in 1993. 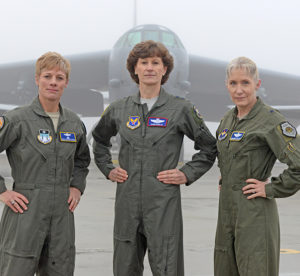 “With only a few women pilots across the service, change took time. To put this in perspective, from 1993 until 2015, I was the only woman pilot in many of my squadrons. I was fortunate in my first operational squadron to meet a few great, and forward thinking, men; often with daughters or sisters, who were instrumental in paving the way for my acceptance, and ultimately my success,” she said.  “And I’ve had other assignments where I felt completely on my own. The test pilot world had fewer cultural barriers to overcome, which was one of the attractions for me to make that transition.”

“Today there is much data on the correlation between diversity and success in an organization and much has been written on the value of diversity in the workplace to include improved productivity and innovation, increased retention and broader success,” Dunlop said. “Being more inclusive, casting wider nets for the best talent, and measuring what matters are just as important for the military as they are for business.

“It took some time, but I think it is well-understood that high standards and strength in diversity are complementary, not competing, objectives. And to remain the best Air Force in the world, we need to harness the strength that comes from diversity of thought, perspective, experience and approach.”

According to the Air Force Personnel Center’s current demographics information, women comprise about 20 percent of the total force, while only 6 percent of all pilots are women. Dunlop says that while becoming a female aviator is still a relatively unique career choice, she hopes that young people understand that joining the Air Force is a viable opportunity for everyone.

“I think we’d all like for every girl and boy to know their future is unbounded and that with hard work and education and talent they can be whatever they can imagine,” Dunlop said.  “Unfortunately, I still come across too many children who, at a young age, have limited their goals based on careless comments from the adults in their lives. As one of the most respected professions in the country we can play a powerful role in shaping our military future and our nation’s future by being a visual representation for today’s children; that there are no limits on what they can imagine for themselves.”

Dunlop also said that while being a woman aviator today is still a very unique career choice, today’s women seem to find more acceptance and support, which she expects will lead to increased opportunities and better retention.

“At the beginning, there was a lot of discovery on where Air Force policies had gaps and we just had to do our best to fill in the blanks,” Dunlop said. “When I arrived at Lakenheath (Royal Air Force Base, England) in 1995 there was one big changing room for everyone and some of the combat gear didn’t fit well. I could work around these issues, which were easier to manage than the negative attitudes about women in combat that made the job more difficult than necessary.” 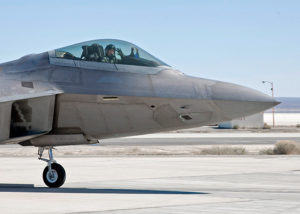 While, some may consider Dunlop and her contemporaries as trailblazers, she contributes her success to friends and supervisors who helped shape her career outlook.

“I consider myself very fortunate in the timing I’ve had as well as the opportunities, but it was truly my friends and supervisors who stretched my thinking and my aspirations who allowed me to achieve more than I expected,” she said. “Perhaps by definition a trailblazer, but just as the WASPs (Women Airforce Service Pilots) or Tuskegee Airmen, I was fortunate in my timing to be able to pursue a profession that allowed me to serve, that challenged me, shaped me, and provided a great sense of purpose.

“It also ultimately helped to open doors that needed to be opened. As a nation which prides itself on equality, opportunity, excellence and innovation, we cannot remain best in the world if we don’t allow everyone to compete and reach their full potential.”

For young people thinking about joining the Air Force, Dunlop said she urges them to consider it. From someone who didn’t come from a military family, she attributes some of her career success to mentors who have helped push her.

“I’d say to them, ‘we need you; we need your talent and your innovation to help keep our nation strong and our future secure.  And in exchange we offer you unbounded opportunity as part of an exceptional team of like-minded Americans, doing important work, delivering solutions to today’s complex challenges, and sharpening each other to become the best you can be,’” Dunlop said.  “I didn’t come from a military family and had no grand Air Force aspirations. I only had great mentors who showed me what was possible, and the desire to be my best.”

Dunlop said that with this approach, in a career spanning 30 years, she’s found herself flying F-15 Strike Eagles on the deck in Europe; flying the F-22 at 60,000 feet and Mach 2; teaching lieutenants to fly in the T-38; working in the U.S. Senate and with the White House; and responsible for 6,000 people working to deliver 316 programs to help further strengthen the military.

“My advice for young people: always give your best, communicate your goals and seek feedback on how to reach them, and don’t easily accept a ‘no’ answer from someone not empowered to give a ‘yes,’” Dunlop said. “I’ve had a hugely rewarding career, and if I can do it anyone can.”