Have fun, try something new, and give back and mentor are three parts that make up Col. Angela Suplisson’s life mantra.

“I try to have fun in everything I do — whether at work or at home. A little bit of fun and camaraderie at work makes the team more productive,” she said. “Trying something new means to be open to new opportunities that may be offered to you or new ideas that you hadn’t considered before.”

Suplisson currently serves as the vice commander of the Air Force Test Center, headquartered at Edwards Air Force Base, Calif. Of the three tenets of her mantra, she said giving back and mentoring is the most important.

“I am grateful that I have had so many mentors in my career who took their time to give me advice and point me in the right direction,” Suplisson said. “I want to pay that back by mentoring others and helping them to achieve their goals.”

Being in an academic environment at the U.S. Air Force Academy allowed her to do just that. Prior to serving as the AFTC’s vice commander, she served at the USAFA in Colorado. While at the academy, she served as the head of the Department of Aeronautics, the USAFA UAS Center director and as an assistant professor.

“Teaching cadets at the U.S. Air Force Academy — seeing them grow from freshmen to seniors as they learn to be leaders of character and become second lieutenants, and seeing them excel as they go on to new adventures once they graduate,” she said. “The absolute best reward I’ve received as an educator is hearing back from my students once they are officers. I love hearing about the amazing things they have accomplished in their personal and professional lives, and I enjoy living vicariously through them. I take great pride in knowing that we’ve prepared these men and women to be officers in the world’s greatest Air Force who have the skills to make a positive difference in our world.”

Suplisson’s career spans multiple assignments. She has been involved flight testing the F-15, F-15E, F-16 and even the F-117. She said it would be difficult to simply pick one or two most memorable assignments, however she does admit one of the most memorable ones include her time at the University of Lyon III, in France, under the Olmsted Scholarship program, due to a life-changing event.

“The Olmsted Scholarship changed my life and opened my eyes in many ways, mostly because I was outside my comfort zone living in France and studying political science at a French university and this allowed me to grow,” Suplisson said. “The Olmsted experience changed my life because it was in France that I met my wonderful husband, Fabrice. The Olmsted Scholarship opened my eyes because living in a foreign country and attending a foreign university allowed me to put myself in someone else’s shoes and appreciate others’ viewpoints. I tried to use this experience to make me a better officer and leader.”

Suplisson was a Distinguished Graduate in the French Basic Course at the Defense Language Institute in Monterey, Calif., in 2001. She earned a Master’s degree in International Policy and Strategy following her time in France in 2003.

“One of the jobs I’m most proud of is being the squadron commander of the Holloman High Speed Test Track in New Mexico. I was part of a team of exceptionally skilled professionals who performed ejection seat testing as well as subsonic, supersonic and hypersonic weapons testing,” Suplisson said. “The skilled craftsmen and engineers are the best at what they do, and we tested and improved the design of the F-35 ejection seat, several bunker busters and hypersonic weapons.”

She said the Mach 6 runs down the track were especially fun because they involved almost all of 120-person squadron to execute the mission planning, setup, execution, tear down and data analysis.

“It was teamwork at its finest,” she said.

Suplisson also had a small role in the development of Auto-GCAS for the F-16. That small role would eventually lead her to research and develop an Auto-GCAS algorithm for larger aircraft; transports, tankers and bombers, for her Ph.D. The eventual goal of the research is to prevent controlled flight into terrain accidents in all heavy military aircraft, she said.

Throughout her career she has seen big changes in how more women are in leadership positions. Women were not integrated equally with the Air Force until 1976. Women had previously served with the Women of the Air Force, and the Women’s Army Corps as aviators before that. Suplisson said she felt lucky to not have to face many challenges as a woman in the Air Force.

“I owe that completely to all of the amazing and strong women who paved the way before me, as well as the men who supported them,” she said. “These women and men blazed the trail and removed obstacles so that I didn’t have to.”

“When I was a lieutenant I didn’t have any female role models in the Air Force whom I knew personally. I was inspired by Test Pilot School grads and astronauts Eileen Collins and Susan Helms, and I wanted to be like them,” she said. “I also had many fantastic male mentors and role models who supported me and helped me achieve my goals. As I progressed in the Air Force, I met amazing women who also became my role models. I am encouraged that today there are mentoring groups and forums like Academy Women and the Officer Women Leadership Symposium that are helping women share their military experiences and achieve their goals.”

A lesson she learned and wishes to impart to a new generation would be to set goals and also to ask for help.

“I would like every boy and girl to know that their future has no limits. If they work hard, they can achieve their dreams, any dream that they set their minds to. Don’t take ‘no’ for an answer and continue to seek out people as role models who can help you get to a ‘yes,’” Suplisson said. “If you want to join the military, set a goal and work hard towards it.  Ask for help and seek out mentors who have already achieved what you want to do. When you reach your goal, continue to set goals that will challenge you.” 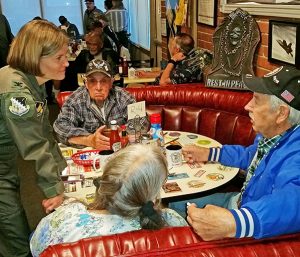 Early in her career, Suplisson had set a goal to enter the Air Force Academy, then to become an engineer, be commissioned as a lieutenant, graduate Test Pilot School and eventually become a squadron commander. However, before she could take off on her journey, she faced turbulence early on when she failed the Air Force Academy candidate fitness test, specifically the pull-up.

“I was not going to let a pull-up stop me from achieving my dream. So I worked hard with a trainer for a couple months, retook it and was able to do the pull-up,” she said. “Improving our pull-ups became a challenge for my freshman roommates and me, and all of us practiced at the pull-up bar in our squadron before taps a couple times a week.”

She also would encourage young people to explore the field of Science, Technology, Engineering and Mathematics (STEM) and to also consider the Air Force as career choice.

“We need your talent and innovation! I promise, it will be the most rewarding experience of your life. We need you to take the reins and lead our Air Force to keep our nation secure into the future,” she said. “The Air Force and our sister services are phenomenal opportunities for young men and women to learn discipline, service, leadership, and a new career field. The camaraderie in the military is the best you can find anywhere. You will be part of a family.”

Suplisson is thankful for her Air Force family, and especially for her own family. Family has been one of her priorities, along with faith and friends. Her priorities have kept her resilient throughout her career during many challenges.

“I would like to say thank you to all the people that believed in me and supported me — my family, friends, supervisors and teammates throughout the years.
I could not have accomplished anything I have in the Air Force without the tremendous support of my parents, brother and sister, and my husband and sons.
Thank you especially to my awesome husband and amazing sons who have given me their constant support and have sacrificed so much. I couldn’t get through any of life’s daily challenges without my faith, my family, and my friends. I would ask all men and women alike to encourage one another in the Air Force — build each other up. Sometimes all you need is one person to believe in you and that changes the course of your life.”

Later this year, Suplisson is set to retire and bid farewell to her Air Force family after almost 30 years of service. She said her final assignment as the AFCT vice commander at Edwards was fitting, considering it had been a launching pad for her career into the testing world.

“This assignment as the vice commander of the Air Force Test Center has been exceptional. It is an extreme honor to work with the men and women of the Air Force Test Center with their relentless focus on the war fighter every day,” she said. “I can’t think of anything better than to able to end my career at one of my favorite bases, with amazing people, and where my test career started at the Test Pilot School 24 years ago.”