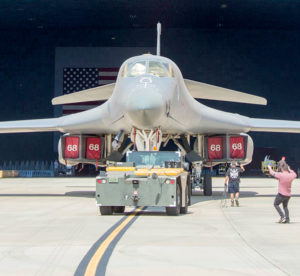 As a new group commander to the 412th Test Wing, I was recently amazed by the incredible engineering talent resident within the 412th Electronic Warfare Group at Edwards Air Force Base, Calif.

Last month, I witnessed Airmen joining Eddie on his “Big Quest for Innovation.” Indeed, they “fed the dragon” by accomplishing two of the Test Wing priorities in a single test; they delivered timely, accurate, operationally-relevant information to the warfighter and unleashed Airmen and their units. And it is worth noting that these were civilian Airmen, engineers, right here at the Center of the Aerospace Testing Universe.

Now, what would happen if we all followed their example? What if we all chose to see things differently and unleashed our creativeness in delivering information to the warfighter? Let’s look at how these Airmen chose to “feed the dragon.”

Back in 2016, some inquisitive B-1B maintainers ran into a problem on the flightline. When they tested the aircraft’s defensive antennas using the approved test cart, they couldn’t tell if the system was working properly. After several years of inconclusive results from the flightline operations check, the program office agreed to put the B-1B in the Benefield Anechoic Facility. That’s where our engineers unleashed their creativity!

This March, the B-1B spent two weeks undergoing tests in the BAF. The tests involved measuring the performance of various antenna configurations on the aircraft within an anechoic chamber. For those of you who have not yet visited the chamber, an anechoic chamber is simply a room without echoes which allows us to accurately measure radio waves from an aircraft. Typically, our engineers would have measured the performance of the antennas and provided the data back to the program office. After some months of data reduction and analysis, the engineers would determine if the antenna design needed more work and more testing.

Our engineers had a better idea! They knew many months if not years could be saved by providing actionable information to the team during the test. They developed and wrote software which allowed for near real-time data analysis during the test. With this timely information, the team iteratively improved upon the antenna design while the B-1B was still in the chamber. As a result of our engineers’ near real-time data analysis, coupled with the team’s ability to quickly modify the design, the test team was able to generate an optimized design during the test … truly innovative!

Innovation is a powerful, game-changing idea. From Vice Chief Staff of the Air Force Stephen Wilson’s on-going “Airmen Powered by Innovation” campaign to the 412th Test Wing’s “Eddie’s Big Quest,” innovation allows our Air Force to outpace our adversaries in delivering war-winning capabilities for the warfighter.

We innovate here at Edwards with the expressed intent of better supporting the warfighter. Innovation for the warfighter! Let me encourage you to ask yourself: What change could I make here at the Aerospace Testing Universe that might produce a disproportional, outsized benefit? Once you answer this question, bring it up with your leadership and work a plan to bring it about. Your ideas are powerful and game-changing — innovation will allow us to outpace our adversaries! Join Eddie and my engineers on the “Big Quest for Innovation!”