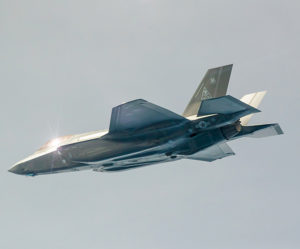 An F-35 Lightning II conduct the first operational live-fire test of AIM-120 missiles released from an internal weapons storage bay over a controlled sea test range in the Pacific Ocean. The 412th Test Wing recently published the technical report on the F-35 Automatic Ground and Collision Avoidance System and have recommended it for fielding; seven years ahead of schedule.

The 412th Test Wing at Edwards Air Force Base, Calif., recently published the technical report on the F-35 Automatic Ground and Collision Avoidance System and have recommended it for fielding; seven years ahead of schedule.

The Auto GCAS is a tool that utilizes a suite of sensors, on-board monitors and flight data to determine if a plane is on course for a probable ground collision. Based on the plane’s trajectory, speed, and lack of input from the pilot, the system then calculates the best way to recover to a safe trajectory.

“The 461st Flight Test Squadron is passionate about identifying, developing, and implementing technology that will benefit the warfighter,” said Lt. Col. Tucker Hamilton, 461st FLTS commander and F-35 Integrated Test Force director. “With respect to Auto GCAS, we knew how important this technology was for the warfighter and did everything in our power to accelerate it; protecting those that go into harm’s way.”

The effort to test the system on the F-35A was headed by the Test Wing’s 461st Flight Test Squadron at Edwards Air Force Base, California, as part of the F-35 AGCAS Team. The whole team consisted of engineers and pilots from the Air Force, the F-35 Joint Program Office, NASA, Lockheed-Martin and the Defense Safety Oversight Council.

Further support was provided to the team by a group of congressmen. In November 2017, Hamilton provided a brief of the program to Rep. Kevin McCarthy and then-Rep. Steve Knight. The support of both California congressmen helped shed light to the importance of the program and accelerate its development by seven years.

“Following our briefing with Colonel Hamilton, Rep. Steve Knight and I sent a letter, along with our colleagues Rep. Paul Cook and Rep. Ken Calvert, to then-Secretary of Defense James Mattis, urging him to work with the F-35 Joint Program Office to prioritize the incorporation of AGCAS as quickly as possible,” McCarthy said.

McCarthy said a driving factor for him and Knight was the bottom line: AGCAS saves lives.

“This technology helps save the lives of our brave men and women who pilot these aircraft while also protecting the significant taxpayer investment in our next generation high-performance military inventory,” he said. “Our servicemembers take an oath to protect us – and the least we can do is make sure they have the most-up-to-date resources they need to carry out their mission as safely and effectively as possible.” 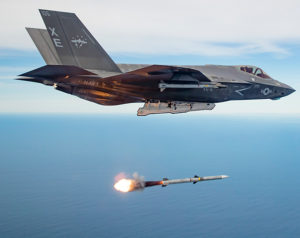 An F-35 Lightning II launches an AIM-120 missile released from an internal weapons storage bay over a controlled sea test range in the Pacific Ocean. The 412th Test Wing recently published the technical report on the F-35 Automatic Ground and Collision Avoidance System and have recommended it for fielding; seven years ahead of schedule.

Hamilton also said that sharing technology with civilians and representatives in government is very important.

“I was honored to be able to describe Auto Ground and Air Collision Avoidance to Congressmen McCarthy and Knight; and share with them the important piece that AFTC (Air Force Test Center) has played in making those technologies a reality,” Hamilton said. “I can’t say how it played a part in accelerating Auto GCAS in the F-35, but I know that those representatives were able to help folks make informed decisions because they understood the maturity and importance of the technology.”

McCarthy believes the F-35 is a premier aircraft in the USAF inventory and said he and his colleagues must ensure that the platform is equipped with the very best technology to ensure mission success, but also the safety of the pilot. He also added that the AGCAS Team’s success further adds to Edwards’ historical legacy.

“AGCAS reflects the good work being done every day by our military personnel and their civilian counterparts at places like Edwards Air Force Base,” McCarthy said. “These proud men and women strive to test and evaluate our nation’s finest technology. I am proud of the visionary leadership being displayed by Brig. Gen. John Teichert (412th Test Wing commander) and Brig. Gen. Christopher Azzano (AFTC commander). Under their command, I am confident that the team at Edwards will continue to advance our community’s proud aerospace legacy.”