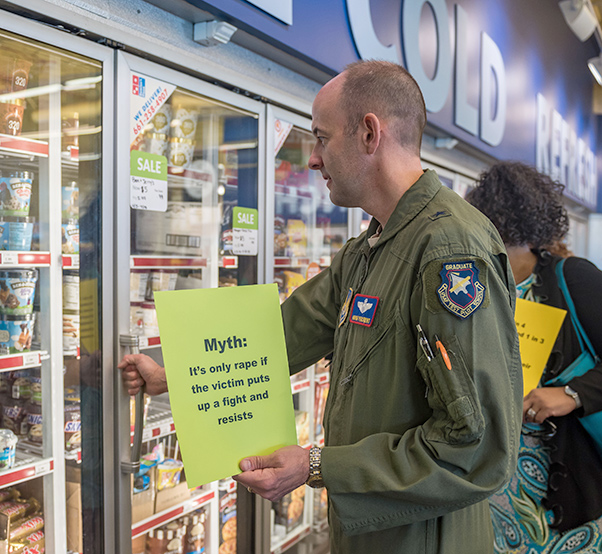 April is Sexual Assault Awareness and Prevention Month. The theme this year is, “Protecting our people protects our mission.”

Personnel from all over the Edwards Air Force Base, Calif., community banded together to fight against sexual assault with events designed to raise awareness.

“Sexual Assault Awareness Prevention Month (SAAPM) provides a great opportunity to raise awareness and promote the prevention of sexual assault through special events throughout the month,” said Carolyn Graves, Sexual Assault Response Coordinator. “SAAPM places emphasis on the critical role that everyone can play in preventing sexual assault and to inspire participants to step up and step into those roles.”

One of the events this year was the Human Sign Freeze Mob. The flash freeze mob idea was based on the popular social trend in which groups of people “freeze in motion” for three to five minutes in public, simply to attract attention in a fun and harmless way, Graves said. 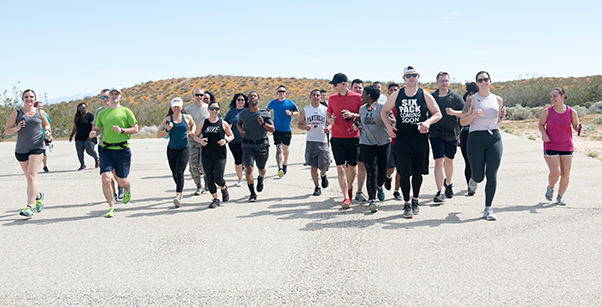 The imagery generated from the mob, which included base personnel including the 412th Test Wing commander, Brig. Gen. E. John Teichert, was startling and attention-grabbing, which was certainly the objective. The mob was a tool to help accomplish the Air Force Sexual Assault Prevention Response program’s mission of “Educate, advocate and collaborate to respond to and stop sexual assault and its harmful effects on the Air Force.”

“To reach that goal, we need to realize everyone can and does play a role in the prevention of sexual assaults, Graves said. “As the focus of preventing sexual assault moves from simply promoting awareness-type events, emphasis is now directed towards bystander intervention and what you can actually do to help prevent an assault. The three D’s; Direct, Deter, Delegate, promoted during the Green Dot campaign identified ways to engage in deterrence efforts.”

While the Edwards SAPR team, accomplished its mission during SAAPM in raising awareness, however they said the mission is ever-going.

“The program must have effective visibility to encourage timely reporting,” Graves said. “Eliminating sexual assault requires every person to be a steadfast participant in creating an appropriate and respectful culture. Although the month of April is identified as SAAPM, advocating prevention is a year-round effort.” 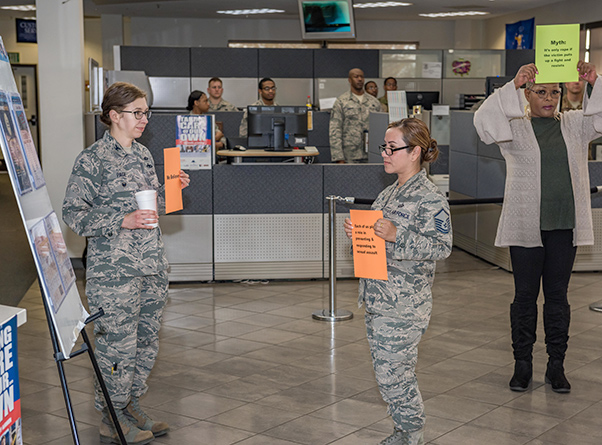 Team Edwards members participate in a Sexual Assault Awareness and Prevention Month Freeze Flash Mob at Edwards Air Force Base, Calif., April 16. Team Edwards members staged the freeze mobs at certain locations around the base and held signs regarding facts about sexual assault.