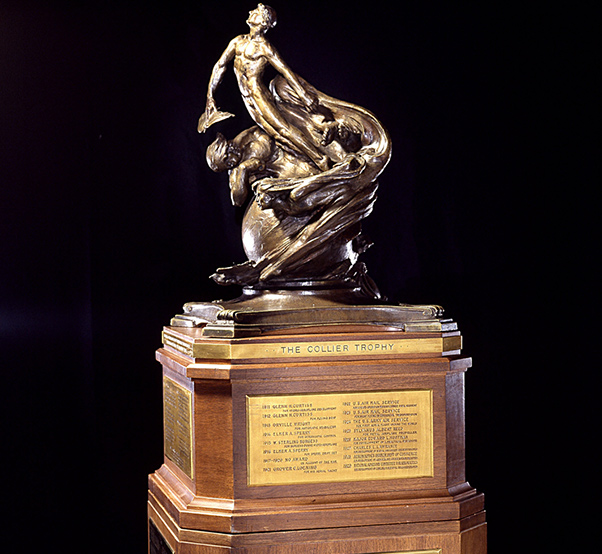 The Automatic Ground Collision Avoidance System (Auto-GCAS) team won the 2018 Robert J. Collier Trophy, an award bestowed annually by the National Aeronautic Association that recognizes “the greatest achievement in aeronautics or astronautics in America, with respect to improving the performance, efficiency and safety of air or space vehicles.”

The NAA selected the Auto-GCAS team for “successfully completing a rapid design, integration, and flight test of critical, lifesaving technology for the worldwide F-35 fleet.”

The winning team comprises representatives from the Air Force Research Laboratory, Lockheed-Martin, the F-35 Joint Program Office, NASA, the Office of the Secretary of Defense, the Defense Safety Oversight Council and other U.S. Air Force entities.

Kevin Price, AFRL program manager and retired Air Force F-16 pilot, says the team is honored and especially grateful for the resulting public awareness. Price explains that the “greatest reward comes from the knowledge that pilots have come home from missions” safely due to the development and transition of Auto-GCAS.

We are “most proud” of the “precious lives and combat resources [that] have been preserved through this revolutionary, life-saving technology,” he said.

Auto-GCAS relies on GPS and a digital terrain database. The system employs complex algorithms and scans the digital terrain around an aircraft’s current and projected area to initiate an automatic recovery at the last instant to avoid a ground collision when needed.

Auto-GCAS saves pilots’ lives by preventing the most common reason for crashes: Controlled Flight Into Terrain. According to Air Force statistics, CFIT is responsible for 75 percent of all F-16 crashes. The leading causes of CFIT are spatial disorientation, target fixation and G-force induced Loss of Consciousness.

Mark Wilkins, a senior aviation safety analyst for OSD personnel readiness and safety praises the “entire team and their commitment and dedication to saving lives through this revolutionary technology.” He described this award as “deeply humbling considering the aviation greats who won previously.”

In April 2019, the 412th Test Wing (Edwards AFB) recommended that Auto-GCAS be fielded on the F-35 following a series of flight tests. The Pentagon estimates that this technology will save 40 pilots as well as 57 F-16s and F-35s through 2040.
Greg Principato, NAA President and CEO, said that Auto-GCAS is “a game changing advance in safety that has already changed military aviation and can one day change the game for everyone.”

The NAA committee, comprised of 30 aviation and aerospace professionals, selected Auto-GCAS over 10 other nominees.

The Collier Trophy, which is on display at the Smithsonian National Air and Space Museum, will be presented during a formal ceremony on June 13, 2019 in Washington D.C.

This achievement marks the sixth time AFRL and its predecessors have won the Collier Trophy since 1926; however, AFRL has made significant, though unnamed, contributions to at least 10 other winning technologies.

Past Collier Trophy Winners — AFRL and its predecessors

1926: Practical Parachute, McCook Field Engineering Division
McCook Field contributed to parachuting, beginning with the invention, development, demonstration and standardization of the free-fall ripcord-operated parachute for airplanes in 1918. Previous parachutes used a cord attached to the aircraft that opened when the pilot bailed out, but these often tangled, which prevented a successful escape. The freefall parachute enabled pilots to clear the airplane before manually deploying the canopy, which greatly increased survivability and became the standard worldwide.

1934: Blind Landing System, McCook/Wright Field
“[D]epending solely upon instruments from take-off to landing, the blind-landing system reached complete development and was put into actual use in 1934. It overcomes one of flying’s greatest hazards and [is] the most practical system developed to date for either military or commercial purpose.”

1937:  Pressure Cabin Airplane, Army Air Corps (Wright Field)
“For having designed, constructed, and completely equipped the XC-35 Sub-Stratosphere airplane, the first successful pressure cabin airplane to be flown anywhere in the world.”
Prior to this development, aircraft had no means of counteracting the decreased pressure at high altitudes that led to aeroembolism, or the expansion of dissolved gas bubbles in the bloodstream.

1939: Aviation Medicine, U.S. Army Medical Corps at Wright Field
Awarded to “Airlines of the U.S. for their record of safety in air travel, with special recognition to Drs. Walter M. Boothby and W. Randolph Lovelace II of the Mayo Foundation for Medical Education and Research and Captain Harry G. Armstrong of the U.S. Army Medical Corps at Wright Field, for their contribution to this safety record through their work in aviation medicine in general and pilot fatigue in particular.” [note: in 1940, “pilot fatigue” was a catch-all term for effects of oxygen deprivation and low pressure at high altitude]

1940: Turbosuperchargers, Army Air Force at Wright Field & GE
Turbosuperchargers compress incoming engine air by using the exhaust to rotate a turbine in the exhaust stream, which runs the air compressor. This enables an engine to increase power at any altitude, but is especially useful for maintaining power at high altitudes with low air pressure.
Selected AFRL Contributions to other Collier Trophy Winners (People and organization(s) named in the award)

1989: F-117, (Lockheed and U.S. Air Force)
The Avionics Lab (along with Materials & Flight Dynamics Labs) predecessors developed the key principles of low observable technology (shaping and radar absorbing materials) that enabled the F-117 and other stealth aircraft (along with fly-by-wire that enabled control of unstable aircraft designs). These principles also applied to the B-2, named in the 1991 Collier Trophy.

Editor’s Note: Some content in the article was originally published in an Air Force News story and a National Aeronautic Association press release.

Recycling and waste collection during COVID-19