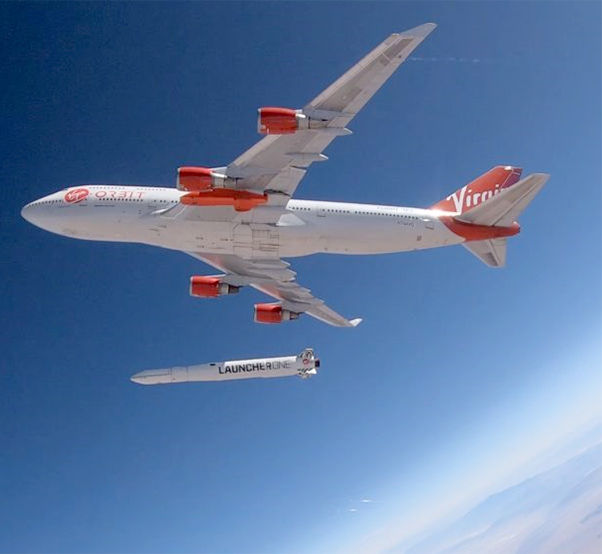 In the run-up to its first space shot, Virgin Orbit completed a steady progression of test flights with its “flying launch pad” Cosmic Girl and LauncherOne vehicle — and the July 10 achievement marks the beginning of the company’s transition to its orbital test flight launch campaign.

On this flight, Virgin Orbit released a fully built, fully loaded — although inert — LauncherOne rocket from Cosmic Girl, a modified Boeing 747 that serves as the rocket’s carrier aircraft. The test flight began with a takeoff from the Mojave Air and Space Port at Mojave, Calif., at 8:43 a.m., PDT; the drop itself occurred at 9:13 a.m., PDT, from an altitude of 35,000 feet over a testing range at Edwards Air Force Base.

The primary purpose of the test was to monitor the few critical seconds just after release, to ensure the rocket and aircraft separate cleanly and to observe how the rocket freefalls through the air.

The drop test represents the last major step of a development program that began in 2015, focused not just on designing the LauncherOne vehicle but proving it out alongside the modified 747 that serves as the company’s carrier aircraft.

Latimer said: “The whole flight went incredibly well. The release was extremely smooth, and the rocket fell away nicely.

“There was a small roll with the aircraft, just as we expected,” he continued. “Everything matched what we’d seen in the simulators well — in fact, the release dynamics and the aircraft handling qualities were both better than we expected. This was the best kind of test flight sortie from a test pilot’s perspective — an uneventful one.”

In Virgin Orbit’s final progression to launch, it has advanced on three parallel streams of work: First, the team needed to test LauncherOne on the ground, proving that its engines, tanks, pumps, software and all other elements can function together as integrated stages. That effort culminated in full thrust, integrated hotfires of both LauncherOne’s main and upper stages. At the same time, Virgin Orbit needed to complete its flight test program — which has now come to a close with today’s drop test.

Finally, the company also needed to build, assemble and test its first orbital test flight rocket. Later this month, Virgin Orbit will finalize that rocket’s assembly before handing it off to the company’s operations team for a rigorous series of checks and rehearsals leading up to its first launches to space later this year.

“Today’s test was a monumental step forward for us. It’s the capstone to a thorough development program not just for a rocket, but for our carrier aircraft, our ground support equipment, and all of our flight procedures,” said Dan Hart, Virgin Orbit CEO. “I’m extremely proud of the team for getting us to this point, and for their spectacular performance today. I’ve told them to take a few hours now to celebrate — our first launch campaign begins in the morning.”

Virgin Orbit’s modified 747 aircraft enables the company to quickly transport its entire launch site to new locations around the world, launching each satellite from the optimal location. In addition to the Mojave Air and Space Port — the California launch site that will be home to the company’s first orbital launch as well as subsequent launches to high inclination orbits — other spaceports both new and established have announced that they are working to prepare themselves for future missions of LauncherOne, including the Launch and Landing Facility at the Kennedy Space Center in Florida, Spaceport Cornwall in the United Kingdom, the Taranto-Grottaglie Airport in Italy, and others.