Air Force Chief of Staff Gen. C.Q. Brown, Jr. presided over the event, where he spoke of the critical importance of AFMC in regards to his action orders of accelerate change or lose, and the vital importance of the command for meeting the demand of today’s Air Force as it faces near peer adversaries such as China, today and in the future.

“Let me begin with a proverb, ‘One who doesn’t look ahead, remains behind.’ As we look ahead, the Air Force will deliver cutting-edge capabilities … capabilities that are needed so we do not see ourselves behind in the future. And the Air Force Materiel Command’s acquisition professionals, engineers, sustainers and innovators are looking ahead and also making sure that we stay focused on today,” Brown said. “Our Air Force can Fly, Fight, and Win … Airpower Anytime, Anywhere, because of you.”

During his speech, Brown talked about Richardson’s distinguished career, highlighting the exemplary service from his time as an enlisted avionics technician at Williams AFB to his first commissioned officer position as a Space Electronics Engineer at the Air Force Research Laboratory, and beyond. Brown also highlighted the exceptional leadership Richardson demonstrated both as commander of the 823rd Aeronautical Systems Group and vice commander of the Air Force Life Cycle Management center as well as in his five times as a Program Executive Officer for organizations across AFMC.

Richardson, an AFMC veteran, previously served in a number of center, program office and headquarters positions across the enterprise. His career in acquisition and materiel brought him to Wright-Patterson Air Force Base for the first time in 1997 where he supported the F-15 System Program Office.

Over the years, he served in a number of leadership roles at the Aeronautical Systems Center and AFLCMC. Richardson was previously the Air Force Program Executive Officer for Fighters and Bombers, PEO for Tankers, and PEO for Presidential and Executive Airlift. He also previously served at Headquarters, AFMC as the Director of Logistics and Sustainment. 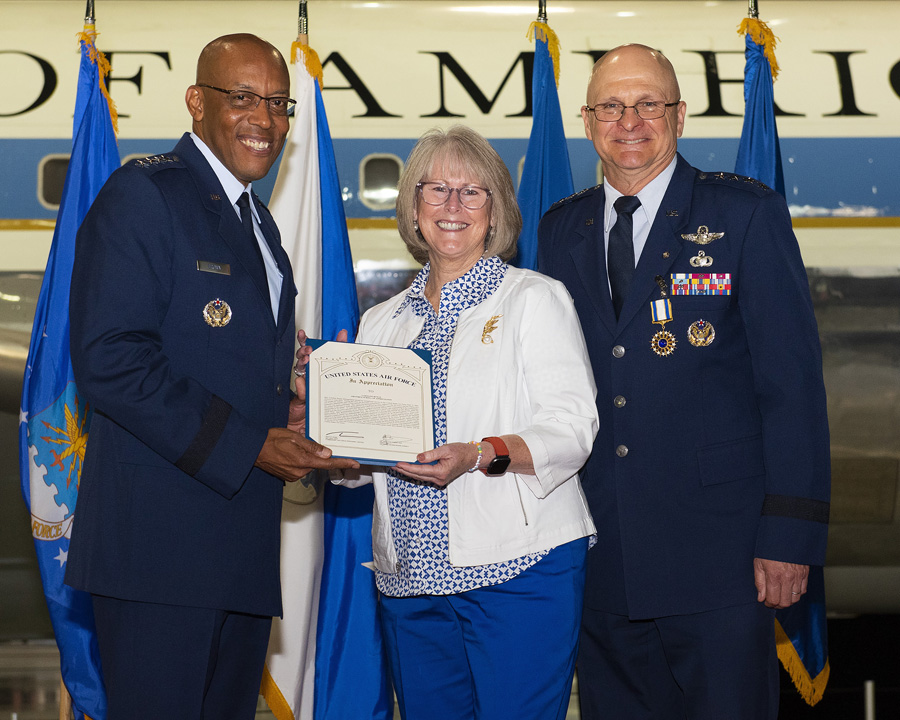 Most recently, Richardson served as the Military Deputy, Office of the Assistant Secretary of the Air Force for Acquisition, Technology, and Logistics at the Pentagon, where he was responsible for research and development, test, production, product support and modernization of Air Force programs worth more than $60 billion annually.

“I’ve been thinking quite a lot about our former AFMC commanders, Airmen like General Pawlikowski and General Wolfenbarger, and now, General Bunch. I am humbled to follow these amazing leaders and ready to serve this awesome command,” said Richardson upon taking command. “My love for this command — its people, its heritage, its mission, even its emblem — is beyond measure.”

Prior to the change of command, Richardson received his fourth star during a brief promotion ceremony.

“When I enlisted some 39 years ago at the ripe age of 18, I certainly didn’t envision today’s event even being a possible outcome for me,” said Richardson, referencing his unique career progression from enlisted Airman to four-star officer. “To the men and women of Air Force Materiel Command, I want you to know I have the highest level of respect for you and what you do. You are extreme professionals. Your work ethic and intellect are unsurpassed. Just as the AFMC tagline states, you are ‘One AFMC powering the world’s greatest Air Force.’ And so, with 17 AFMC years and counting behind us, Dede and I are so very thankful and ecstatic to rejoin the AFMC formation.”

Bunch’s retirement ceremony was held immediately after the change of the command.

“I have been honored to serve, and privileged to work for you, as we have solved some of the Air Force’s biggest problems. My position has not changed from day one of taking command our Air Force cannot be successful if we, as a MAJCOM, are not successful. Your efforts ensure that we can fly, fight and win airpower anytime, anywhere,” said Bunch. “Airmen of Air Force Materiel Command, you’re getting a great leadership team. With your support, I know that AFMC will soar to greater heights under Duke’s leadership and vision. They will take care of you, and I know the mission will get done.”

Bunch attended the U.S. Air Force Test Pilot School from July 1990-June 1991 after which he served as a test pilot with the 6512th Test Squadron and the 420th Test Squadron until June 1995. He returned to Edwards AFB, Calif., in 2000 as commander of the 419th Flight Test Squadron, a position he held until July 2002.

Richardson will lead a work force with 89,000 uniformed and civilian Airmen and manage an annual budget of nearly $72 billion, as the command pursues its mission to deliver and sustain war-winning capabilities for the Air Force.