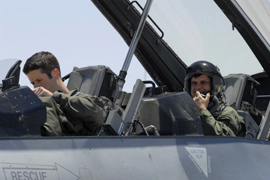 Capt. Hank McKibban, 61st Fighter Squadron instructor pilot, prepares to fly then Phoenix Mayor Phil Gordon in an F-16 orientation flight June 8, 2007. The purpose of the flight was to promote understanding to community leaders of Luke’s F-16 training mission and the airspace requirements to accomplish it.

The Orientation Flight Program offers opportunities to reward and motivate individuals and provide a better understanding of the Air Force and its flying capabilities.

Orientation flights can be flown on most Air Force aircraft with two seats or more, from cargo to fighter aircraft.

At Luke Air Force Base, Ariz., individuals are provided the opportunity to fly in the one of the Air Force’s fastest fighter aircraft, the F-16 Fighting Falcon.

“Our goal is to provide as many people as possible the opportunity of flying by filling as many backseats as we can throughout the year,” said Staff Sgt. Joy Creal, 56th Operations Support Squadron, aviation resource manager for the 56th Fighter Wing Orientation Flight Program.

In fiscal year 2017, more than 200 orientation flyers were flown at Luke, with that number expected to increase for 2018.

“The program includes various types of flights such as, incentive, familiarization, distinguished visitor and spouse orientation flights,” Creal said. “While these flights are similar, they all have different missions.”

An incentive flight provides a visible reward to active duty or reserve military personnel for outstanding service and motivates others to attain similar performance levels. Familiarization flights acquaint individuals who normally have aviation-related responsibilities with aircraft and missions.

“I think the Orientation Flight Program is great because it allows extraordinary Airmen who are selected to fly a chance to be integrated into the mission and see the big picture of what they’re contributing to on a day-to-day basis,” Creal said.

One of these outstanding Airmen is Senior Airman Haleigh Evans, an aviation resource manager assigned to the 309th Fighter Squadron who recently received a familiarization flight in an F-16.

“One of main reasons why I was selected was so I could be truly aware of what my job ultimately contributes to,” Evans said. “From the pre-flight brief to actually stepping to the jet, it’s truly an eye-opening experience to see what is involved in just one sortie mission.”

Evans encourages anyone who is looking for their next opportunity to fly, to ask their leadership for a chance to be nominated.

“Flying in an F-16 was truly one of most rewarding experiences I’ve had in my career so far and it has definitely motivated me to work harder,” Evans said.