Patriotism and emotion will be flying high at this year’s March ARB Air Show on April 16-17, 2016. Your company can show its support for our military and reach out to a very captive audience by advertising in the March ARB Air Show Edition, a supplement to The Beacon, official base newspaper for March Air Reserve Base.

This edition will feature a schedule of all events at this year’s March ARB Air Show.

The March ARB Air Show 2016 Edition, produced in full color, will be distributed as a supplement to The Beacon in all its regular locations plus will be given to spectators.

It is estimated that over 200,000 people will attend the show. Also, it should be noted that this publication is a souvenir item that will be kept and looked at long after the Air Show. 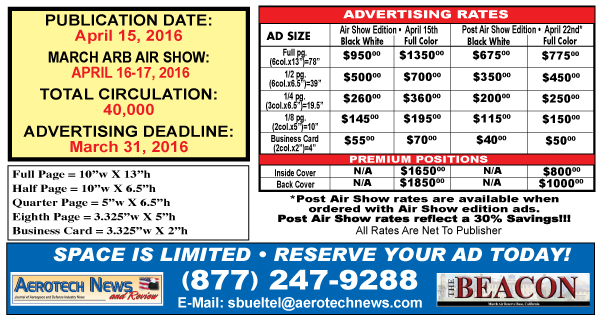